Despite comparisons to Goodfellas and Boogie Nights, David O. Russell's latest is an incoherent, overacted mess 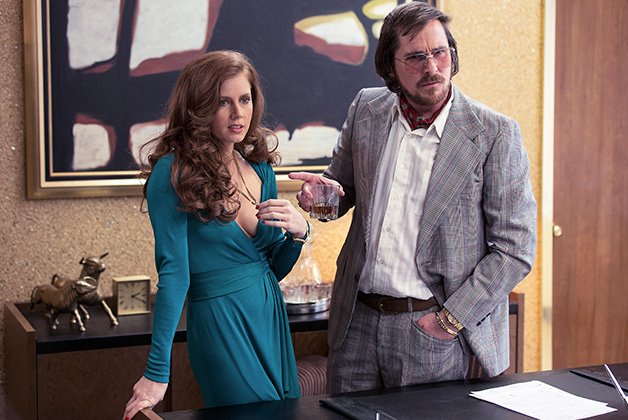 Amy Adams and Christian Bale let it all hang out in American Hustle.

American Hustle is nominally a story about the barely remembered Abscam sting, in which the FBI used a small-time con artist to snare politicians on bribery and corruption charges, mostly revolving around the redevelopment of Atlantic City. But the plot is incidental to the shouting. David O. Russell is all about the shouting.

Encouraged by the still not entirely explicable praise thrown at The Fighter and Silver Linings Playbook, Russell has fully embraced the notion that drama only exists when characters are yelling at one another in mid-shots. Here they’re doing it in 70s wardrobe and hairstyles, which apparently makes American Hustle a withering social satire, too – though, as with The Fighter and Silver Linings Playbook, I never really felt like I was in on the joke.

The actors are certainly having a blast. Christian Bale, with an elaborate comb-over and a bloated gut that looks like it holds all the weight he lost for The Fighter, is the con artist, jabbering scammer Irving Rosenfeld Amy Adams, also from The Fighter, plays his lover and partner, Sydney Prosser, with big hair and a fondness for open-chested tops.

Oh, and look! There’s Jennifer Lawrence doing much the same thing she did in Silver Linings, as the mercurial, argumentative woman to whom Rosenfeld is actually married, and there’s Bradley Cooper, pop-eyed and pleading, as the dipshit FBI agent who ropes everyone into the circus in the first place.

As with every movie Russell has made since I Heart Huckabees, people race around shouting about their ambitions and desires, and whoever shouts the loudest is the person with whom we’re supposed to sympathize. Some people love this strategy I find it exhausting and pointless – especially in the second half, when scenes seem to exist because Russell had noticed that Bale and Lawrence’s characters hadn’t yelled at each other in a while.

American Hustle is being compared to GoodFellas (because crime) and Boogie Nights (because sideboob, I guess). Let’s throttle back on that and see it for what it is: another incoherent, overacted mess from Russell.