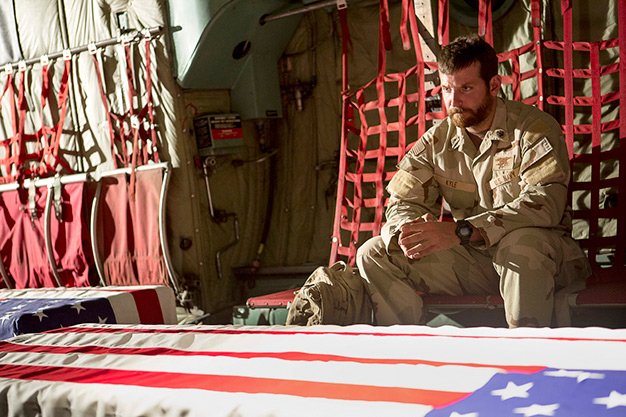 Clint Eastwood is an awfully lazy director these days. American Sniper is based on the autobiography of Navy SEAL turned Iraq War sniper turned right-wing poster boy Chris Kyle. But I’m not sure Eastwood realized that the script, developed by producer/star Bradley Cooper with writer Jason Hall, is more interested in Kyle’s PTSD than in his confirmed kill count.

I read Kyle’s alpha-male autobiography. The film’s protagonist agonizes over whether to shoot women and children more than the real man ever did.

The movie’s Kyle is an interesting, almost tragic character. A bulked-up, bearded Cooper does a fine job of showing us how deeply uncomfortable he is stateside, though Sienna Miller gets little more to do than look concerned as his wife, Taya.

But Eastwood’s disconnected direction means we spend the entire movie with a man in stasis: Kyle’s either hiding behind the scope of a rifle or sitting very still, drinking himself insensate.

Forcing Cooper and Miller to play a key scene with a rubber doll instead of an actual baby is another indicator of Eastwood’s late-period apathy, the most egregious sign since he included a child actor’s flubbed line reading in Hereafter. Sure, at 84 Eastwood’s earned the right to coast, but we don’t have to pretend he’s still making good movies.