Director looks at race as well as gender, equality and class 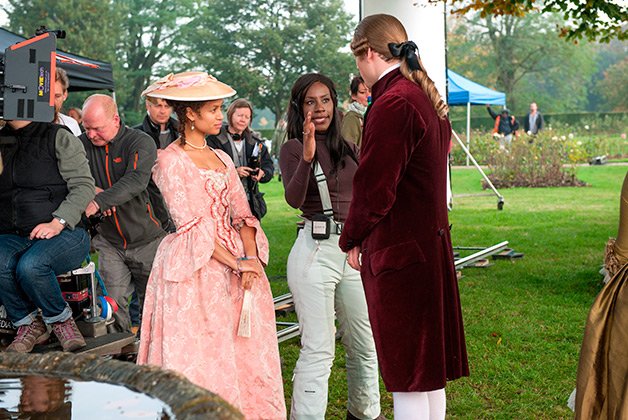 Amma Asante’s first film, A Way Of Life, played the 2004 Toronto Film Festival and promptly disappeared. That was a shame. The study of a teenage mother in contemporary Wales, it was a gripping drama about a young woman trying to define herself on her own terms.

Raised by her uncle, the Lord Chief Justice of England (Tom Wilkinson), alongside his own daughter Elizabeth (Sarah Gadon), Dido grows up to make the acquaintance of crusading young solicitor John Davinier (Sam Reid) and contribute to Britain’s move toward outlawing the slave trade.

But there’s something more intimate and complex underneath. Though it hits the expected melodramatic beats of a woman torn between two suitors, Asante parallels Dido’s journey toward self-actualization with her association with the abolition movement – which meant Belle had more in common at last year’s TIFF with The Invisible Woman, Ralph Fiennes’s biopic about Charles Dickens’s mistress, Nelly Ternan, than with 12 Years A Slave. Not that too many people noticed.

“So many interviewers have compared it to other movies where they have leads of colour or that have been about slavery,” says Asante. “For me, what’s just as important as race in this story is the gender status, equality and class issues. They completely overlap with each other. Pardon the pun, but they’re not black-and-white issues.”

Most of those issues, Asante explains, were not present when she first came aboard on the project.

“What I received was something called Belle And Bette, a story as much about Elizabeth as it was about Dido,” she says. “Elizabeth ends up having an affair with John Davinier, and the two sisters can’t stand each other – you know, Elizabeth is a spoiled brat. It was all very conventional and we’d seen it before, to be perfectly honest with you. What I wanted to do was shake it up and do something more complex.

“I think I’ll always be striving for that in the choices I make in the stories that I get to tell.”

Amma Asante on putting Dido Elizabeth Belle at the centre of a much larger story:

Asante on working with a fairly famous cast:

Asante on bringing Belle to TIFF with the understanding it wouldn’t open until 2014: