An Open Letter to Kyle Lowry 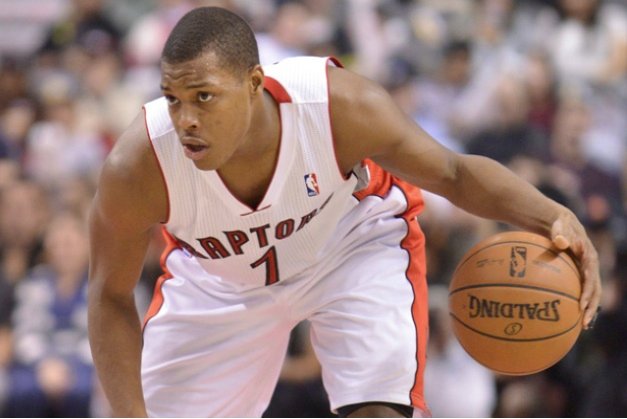 First of all, sorry: You got robbed. Twice.

You scored 36 points and had six assists last night in the Raptors’ 115-113 Game 5 win at the Air Canada Centre. But you did not make A1 of any major newspaper today. You didn’t get the coverage you fully deserve. Our mayor made sure of that. But, Kyle, the truth is, you weren’t even the story of the game.

The Raptors’ spectacular unravelling after being on the cusp of completely spanking the Brooklyn Nets overshadowed all of your circus shots, your clutch late-game free-throws, your unlikely, acrobatic drives to the basket and your six 3-point shots. Seriously, the box score says you were 6/9 from behind the arc. That is an outstanding statistic, and yet, hasn’t made many writeups. The game was simply TOO CRAY.

In fact, it was fitting that Rob Ford’s troubles kept billowing out of Toronto news outlets even as your 26-point lead was sensationally built up, and then heart-wrenchingly slipping away, point by point until you were tied up.

Because, quite frankly, Kyle, I don’t know what smoking crack feels like, but I sure felt like a crackhead watching your game last night. I’ve heard it’s an intense and fleeting high, and that the comedown ain’t pretty. And sure enough, one minute we were elated: revelling in free lint-rollers, trying to spot 50-cent courtside (wearing his Northern Uprising hat), gleeful in your crazy half-time buzzer beater that put you up by 18 at half (and the other two almost-buzzer beaters from WAY downtown).

And then, whammo: In the fourth quarter, your team defense was shakier than Rob Ford after hitting the pipe, and your collective decision-making just as shoddy as the mayor’s. And we, at the ACC, were dumbstruck – more paralyzed than Jimmy Brooks in season 5 of Degrassi. It felt like a really bad trip. We were this close to rock bottom.

But it’s because of you, Kyle, that even then, I wasn’t tempted to jump off the sixth-floor media gondola. Because you’ve been outstanding down the stretch of every one of these playoff games, and most of the important regular season wins. And once Coach Casey finally put you back into the fourth quarter after your little rest that seemed so long, there was this feeling that you wouldn’t let us down. Are you an Aries? Because you are stubborn as hell. (Wikipedia check: yes, you are an Aries.)

In the end, the Raptors simply would not have eked this game out had it not been for you.

But don’t take it from me, Kyle. After the game, your coach said your 36 points were “huge” for the Raptors. (Understatement of the year, but Dwane Casey was pretty pissed, so forgive him for being curt.) Starting centre Jonas Valanciunas attributed the win to your final five points. Your backup Greivis Vasquez said “He’s our man, he’s our guy. Unbelievable, man. This guy is fun to watch, a great leader and a great example for me. I love what I’m going through with him right now because he’s just playing unreal basketball. He was our MVP tonight. Thirty-six in the playoffs? That’s not easy.”

And wow, Kyle. You’ve been here two years, and I’m not sure how many people predicted this. Last year you averaged 11.6 points per game. You had the reputation of being a bit of a prickly guy. This year, we feared you’d get traded away to New York. The Knicks are an enticing if terrible team, and it’s so close to your hometown, Philadelphia, after all.

But with every hoop you made last night, we could hear the ka-ching of the cash register. You’re making yourself very rich these playoffs, Kyle. And you’re making Toronto want you really, really bad.

We like you. They haven’t made enough jerseys with your name on them yet, but I can bet that the next order from MLSE will include a lot with LOWRY stitched across the back. We hope you like us, but, the way you were walking down the hall post-game with DeMar DeRozan, joking and smiling, it seems like you like him, at least, and that you’re having fun here. Winning is fun, after all.

And the way you patiently patted Terrence Ross on the head, and calmly gave him words of encouragement throughout the game, even as the explosive second-year player has struggled in this series, showed you’ve got leadership qualities to boot.

And, according to my Twitter feed, on a night when our mayor seems to have finally succumbed to his demons, crashing out (we hope) a few months shy of the mayoral election, Raptors fans, tried, true and bandwaggon-jumping, seem ready to put you in his place.

Anyway, Kyle. Thanks for everything.