Integrity commissioner's report on councillor's $80,000 fundraiser raises troubling questions that go way beyond the actions of a single politician 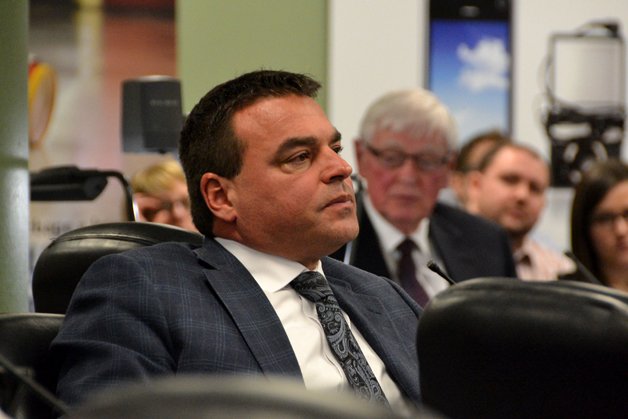 It has all the ingredients of a bona fide blockbuster scandal: a fundraiser attended by lobbyists, contractors, and other local bigwigs millions of dollars worth of city contracts an alleged attempt to erase the paper trail and at the centre of it all a politician who claims he can’t remember what happened because he has amnesia.

Integrity commissioner Janet Leiper released a scathing report Thursday into a May, 2013 fundraiser that raised $80,000 for Councillor Giorgio Mammoliti. It’s damning stuff. She determined the councillor broke council’s code of conduct, and for the first time in the city’s history, she’s recommending the harshest penalty allowed by the rules – that council dock his pay for 90 days, which would cost the councillor $26,000.

The details of her report raise some troubling questions not only about council’s ability to penalize members who break the rules, but also whether one councillor has become more beholden to a group of wealthy backers than the residents who elected him.

At the time of the fundraiser, Mammoliti owed the city $52,000 as a result of an audit into his spending during the 2006 election campaign. He was also facing hefty legal bills over a review of his 2010 election finances, which found he overspent the limit by $12,065, or more than 40 per cent.

His financial situation at the time suggests he would struggle to pay those bills. The initial CBC report on the fundraiser cited court documents he filed as part of divorce proceedings attesting that he had $175,000 in annual expenses while making a salary of only $106,000. He had been forced to borrow $100,000 from one of his sons and moved back in with his parents.

An April 12, 2013 letter sent to Mammoliti’s supporters requested their attendance at a $500-per-plate fundraiser. The letter, signed by Mammoliti’s son Michael, claimed the councillor’s “continued dedication to the mayor” had made him “the subject of political and personal attacks” that had “taken their toll on him financially.”

It asked for their help “so he can continue to fight the good fight at Toronto City Hall and not be held back by the financial burdens these attacks have brought.”

The invitation included an important disclaimer: “Rest assured any contributions made will not be in any way a conflict. We have obtained legal council (sic) and opinion to help guide my father through this fund raising process and eliminate any possible conflicts or code of conduct issues.”

The lavish fundraiser took place at the Royalton Banquet Hall in Woodbridge. More than 200 people attended. Leiper redacted the names in her report, but said those present included:

• A corporation that has contracts with the city worth millions of dollars. It was invited by Mammoliti’s staff and purchased a table for $5,000.

• A corporation that bid and received contracts from the city in 2013, which also bought one $5,000 table.

• Six registered lobbyists or clients of lobbyists who committed $31,000 between them.

• A landscape company that has done projects in Mammoliti’s ward and bids on city projects, which paid for one $5,000 table but didn’t send anyone.

• A principal in a company that was bidding for a “significant” city contract at the time (the contract eventually went to someone else).

• A lobbying firm that had active lobbying files with the city and that initially committed to buying one table. Interviewed by the integrity commissioner afterward, however, the firm’s partners said they didn’t pay for their tickets but were there as Mammoliti’s guests. The firm was not identified but the president of the powerful Sussex Strategy Group, as well as one of the firm’s partners, were photographed at the event.

Melissa Palladino, Mammoliti’s executive assistant, was listed on the invitation as the event contact. Leiper determined that Palladino and another of Mammoliti’s aides sent emails about the event during work hours on 38 separate workdays, doing fundraiser-related tasks like designing tickets, arranging printing, confirming RSVPs, and communicating with event staff. It appears this may have broken council rules that say councillors can only use city resources for city business.

Although Mammoliti’s staff planned the fundraiser, Leiper’s report says an event company, Red Velvet Events Inc., was “brought in” to act as the organizer.

In one email to the company Palladino wrote “Just following up on our text conversation regarding [Red Velvet] as ‘hosts’ of the fundraiser… You’ll see the extent that we’ll be ‘using’ your company name.”

Instead, Red Velvet’s name was put on the contract and ticket payments were made out to the company.

The day after the fundraiser, May 23, Red Velvet issued Mammoliti a cheque for $40,000. On May 30, they issued him a second cheque for the same amount.

Six days before the fundraiser, Red Velvet cut Mammoliti a cheque for $16,000, marked “Stag.” Leiper did not consider this cheque as part of her report except to note that its “timing and source raise questions.”

The integrity commissioner found that in accepting the $80,000, Mammoliti violated council’s code of conduct, which prohibits a councillor from accepting any gift or personal benefit “that is connected directly or indirectly with the performance of his or her duties.”

There are exceptions to this rule, but Leiper determined the fundraiser didn’t fall under any of them. In any case, the maximum monetary value of a permissible gift is $500, and the money Mammoliti accepted was 160 times greater than that.

Leiper contacted Mammoliti and suggested that he repay the money, but she didn’t get a response, and there’s little she can do about it. The courts ruled in the Rob Ford conflict of interest case that the integrity commissioner doesn’t have the authority to ask council to order one of its members to give back cash contributions.

Instead, she is recommending council impose the harshest penalty allowable by the rules: docking his pay for 90 days.

The councillor initially told Leiper that when the invitation was sent out, he was in hospital recovering from brain surgery and he only found out about it after he was discharged.

He claimed that his son had organized the event to toast his “life and recovery” and denied that the fundraiser was “for political or campaign purposes.” He also said his surgery caused memory loss and his recollection of anything around the time was, and still remains, “limited.”

The day Leiper’s report was published Thursday, July 3, Mammoliti issued a 1,129-word statement asserting that he had confidential information that completely exonerated him, but that he couldn’t share it.

He said because the person who complained about him to the integrity commissioner, lawyer and activist Brian Iler, had leaked some preliminary parts of her investigation to the press, the process had been compromised. Mammoliti claimed providing Leiper with the exonerating info would risk breaching his own privacy.

Does Mammoliti have a case?

Mammoliti’s claim that the event was to celebrate his recovery from a health scare is undermined by the fact that:

1. His staff were in discussions about the fundraiser before he knew he needed emergency brain surgery.

2. The invitation stated explicitly that the intent was to help the councillor financially – it made no mention of his health.

His assertion that he knew little about the event is also questionable as he was periodically copied on emails about it, and correspondence from his staff referred to his instructions for it. One email stated he was going to personally collect payment from one of the invitees.

Leiper also found that Mammoliti could not claim he was acting in good faith. She wrote that the disclaimer in the invitation about contributions not constituting a conflict, as well as his staff’s instruction that his name be removed from the event contract, was indication that Mammoliti and his employees were aware the event could constitute a breach of council’s Code of Conduct.

Leiper’s report will go to council next week, but Mammoliti’s already taken the issue to court. Last month he sought a judicial review in hopes of stopping the investigation, arguing it was biased against him.

A hearing date has yet to be set, but now he’s threatening to take the city to court if council doesn’t defer voting on the report until the legal proceedings have wrapped up. That likely wouldn’t happen until after the October 27 election, in which Mammoliti is already registered to run.

Council could vote to suspend his pay despite the threat of legal action, but given that the $26,000 he would be forced to forfeit is $54,000 less than what he collected from the fundraiser, it still leaves serious questions about whether the punishment fits the scale of the violation.

Council doesn’t have the power to kick the councillor out of office or prevent him from running in the next election. Iler, the complainant, is furious Mammoliti may not face harsher penalties. He thinks the province should change legislation to allow the integrity commissioner to dish out stiffer punishment without having to seek the approval of council. He also thinks the police should investigate whether Mammoliti broke any laws.

“I don’t think this man should be in office,” he says.