Bigger, cameo-ier, about exactly as funny as the original 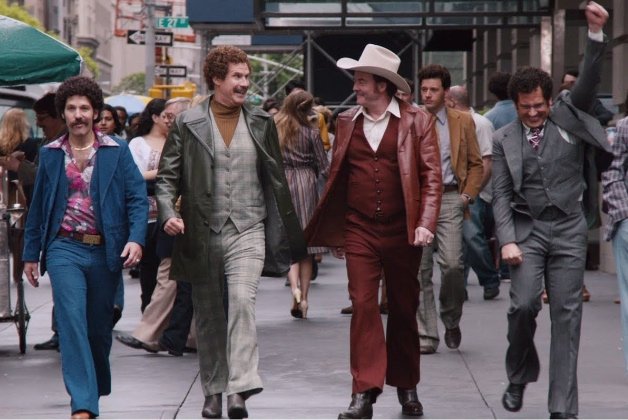 Ministry of silly haircuts: in Anchorman 2

The air of ceremony hanging over 2004’s Anchorman – the portentous voice-over, The Legend Of Ron Burgundy subtitle – was part of the joke. Square with the film’s deeper irony, it worked to lend the story faux importance, investing the bungling antics of Will Ferrell’s smarmy mid-70s newsman with an almost mythic sense of consequence and grandiosity. In Anchorman 2: The Legend Continues, that same epic air feels weirdly justified.

The original Anchorman’s smorgasbord approach to tone and impudently slapdash plotting are undeniably charming, especially after repeat viewings. Like The Jerk or the Monty Python films, Anchorman sfelt like it was setting, and then upsetting, its own terms on the fly. In the eight years since, the original movie has earned a reputation as a modern comedy classic, its scotchy-scotch-smooth blend of bro humour, light-touch surrealism and period fabrics establishing a template for a generation of man-child comedies, not the least of them the subsequent Ferrell and McKay team-ups Talladega Nights: The Ballad Of Ricky Bobby and Step Brothers.

As much as the duo have managed to rework that Anchorman magic, it’s the kind of thing that’s hard to replicate. As soon as you start cranking out bottled lightning in your lightning bottling factory, the effect is ruined.

Anchorman 2 unfolds like a remix of the original. Transporting Ron Burgundy and his news teammates (Paul Rudd, David Koechner and Steve Carell, whose post-Office fame earns him a subplot involving a sheepish romance with Kristen Wiig) to the early 80s, when they’re hired to work the graveyard shift on a newfangled, CNN-style cable news network, the sequel shifts the tension from rival local news gangs to a slick prime-time host played by a grinning, intermittently funny James Marsden.

The sequel also splits the romantic and sexual tension between Burgundy’s estranged wife (Christina Applegate) and his new African-American boss (Megan Good), which admittedly yields a pretty funny Guess Who’s Coming To Dinner? scene that has Burgundy spewing racial insensitivity through the foot in his mouth.

A detour to a seaside lighthouse where Burgundy sequesters himself after going blind, forfeiting both his job and his preening vanity, subjects his defining hubris to its most serious assault yet. (An earlier gag involving a failed suicide attempt one-ups his slovenly alcoholic stupor in the original.)

Like its predecessor, the movie is most itself when its stars are goofing around with one another. The chemistry between the central foursome remains the film’s sturdiest asset. It’s a shame that Anchorman 2 expends so much energy and calls in so many favours trying to imitate the original – a film that was always at its best when it felt like it was making it up as it went along.