NOW MagazineNewsNobody gets pregnant to have an abortion

Nobody gets pregnant to have an abortion

"I can't believe that we still have to fight for these rights in Canada," Micki Landa said at a rally. 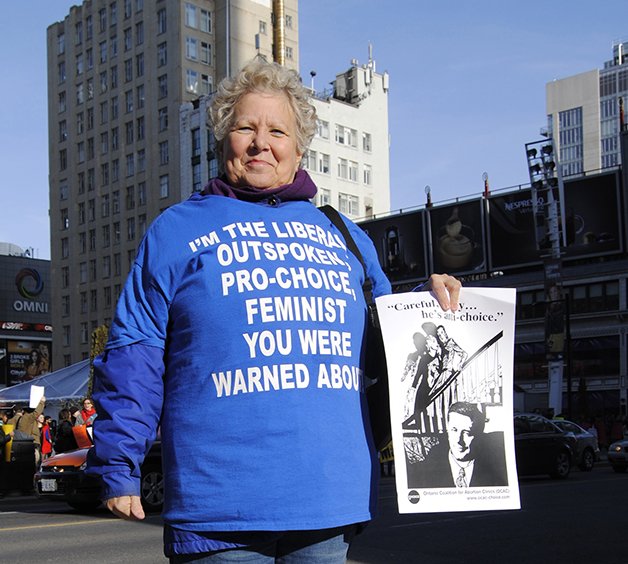 “I can’t believe that we still have to fight for these rights in Canada,” Micki Landa said at a rally in Toronto Thursday referring to strict regulations limiting access to abortion for women in New Brunswick.

Landa, a women’s rights activist who first took up the cause in the 60s, and thousands more joined rallies across Canada to protest the provincial regulations that are in contravention of the Canada Health Act.

Two doctors’ notes proving it’s “medically required” – that’s what it takes to get an abortion in New Brunswick. And, the procedure is only covered by insurance if it’s performed in a hospital by an obstetrics and gynecology specialist. In other words, the province doesn’t cover abortions done outside of a hospital.

This is not the case in any other province.

Under the Canada Health Act, abortions are an essential service covered by health insurance, but since 1984 New Brunswick’s Regulation 84-20 has put major restrictions on access.

That’s why Henry Morgentaler, a pioneer in the abortion rights movement in Canada, opened a clinic in Fredericton. It has performed approximately 60 per cent of the province’s abortions and spends $10,000 annually to help some of its 600-700 patients pay for the procedure.

The clinic offered pro-rated and even pro bono procedures for women in an underserviced area with some patients travelling from Nova Scotia, PEI and even making a 10-hour drive from Sydney, New Brunswick just to access the clinic.

Because of a lack of funding, the Morgentaler Clinic will be shutting its doors in June. Morgentaler had previously funded the clinic himself.

One young woman has renewed the fervour for a new generation of feminists.

Sorcha Beirne is a 16-year-old high school student in Fredericton who organized the rally that attracted over 500 protesters in New Brunswick.

When the clinic announced it would close, Beirne and her group became involved in the fight to get the clinic funding. Clinics like Planned Parenthood and the Morgentaler Clinic are provincially funded in every other province in Canada.

For Beirne and her group, “This is an accessibility problem, not a pro-life or pro-choice debate,” she said. “We do have law, we just need the access.”

From a legal standpoint, New Brunswick is in violation of the Canada Health Act, according to Kim Stanton, legal director with Women’s Legal Education and Action Fund.

“Can you think of any other medical procedure that requires two doctors’ permission?” she said in an interview.

“It’s a procedure that’s legal in Canada. Why should a woman have to go through these hoops?” she said.

Abortion is a very personal and time-sensitive issue and the time it may take to secure not one, but two doctors’ notes is a barrier to “low-income women.”

Women in PEI don’t have access to abortion at all meaning they have to travel and many would go to the clinic in New Brunswick.

“They’ve already got travel costs, childcare costs and they might have to take time off work. And then they have the cost of the procedure on top of that,” she said.

Considering most Canadians don’t know the price of health care in our country, what I’m about to tell you is shocking.

In Halifax, Nova Scotia, “if a women does not have coverage the cost is $1,800,” said Simone Leibovitch, manager of the Morgentaler Clinic in New Brunswick. At the clinic the cost is between $700-800 and the clinic offers partial and full payment for anyone who could not afford the procedure.

The clinic’s motto after all is, “every mother a willing mother, every child a wanted child.”

As for the range of people that she’s seen come through the clinic in her seven years as manager, Leibovitch says, “it’s everyone.”

“It’s young women. It’s old women. It’s women that have their tubes tied or with husbands that have vasectomies. Birth control is far from perfect,” she said.

“Nobody gets pregnant to have an abortion,” she said, “Shit happens!”

The clinic’s closure means that the only facility in New Brunswick offering abortions outside of hospitals will be gone. Currently, 50 per cent of women from PEI access abortions at the clinic.

“That’s going to be a crisis for all kinds of people,” said Michelle Robidoux with the Ontario Coalition for Abortion Clinics at the Toronto rally.

Robidoux turns the issue on its ear with an astute example.

“If a woman who’s pregnant and wants to have the baby in New Brunswick is told she has to have the consent of two doctors to do that it would be a no-brainer,” she said.

“It’s punitive, it’s paternalistic, it’s against the Canada Health Act,” she said of the regulation.

Morgentaler was suing New Brunswick in an effort to force the government to pay for abortions at his clinic. That case was dropped last week, but that doesn’t mean women are dropping the cause.

About a hundred protesters lined Yonge Street at Dundas Square Thursday holding hangers and signs that read, “Rona Ambrose enforce the Canada Health Act,” “Honk for choice” and “Thou shalt not mess with women’s reproductive rights – Fallopians” (a play on a biblical reference).

Danielle Waters, a queer trans woman who helped organize the rally, raised the issue of poverty and trans reproductive health noting that if a man has not fully transitioned with bottom surgery there is always a risk of pregnancy.

“Poverty tends to impact trans populations along with First Nations people and visible minorities the most,” she said reinforcing that the clinic’s closure will affect low-income women.

“If you don’t have access to abortion, often women and trans populations will turn to abortion through other means including the use of wire hangers,” she said.

To bring that point home a 10-foot hanger was held high at the Toronto rally.

Julia Bennett was holding that hanger with her daughter.

“I was a young woman when the law was overturned and it’s now a common and regulated procedure in Canada,” she said. “People thought they could hang up this hanger a long time ago,” she said.

For Robidoux, the most inspiring part of the day was the young women that came to the rally.

“This is their time now to really take this and run with it and win it for women right across the country,” she said.

In New Brunswick the next steps include writing MPs, organizing more rallies and partnering with other provincial partners.

Beirne said, “We’re very certain that we will achieve what we want eventually and we’re going to keep fighting for what we think we deserve. We’re definitely not going let this go now that we’ve got things started.”