NOW MagazineNewsAndrea Horwath goes all in

Andrea Horwath goes all in

By forcing an election, the NDP leader knew there would be a political price to pay in Toronto. Will the gamble pay off? 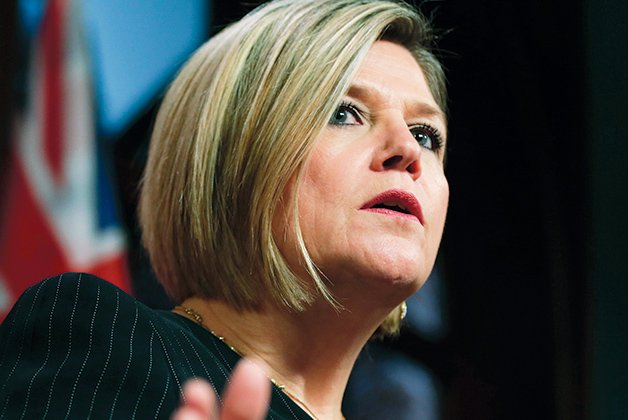 The applause for Ontario NDP leader Andrea Horwath was decidedly polite during a campaign stop at the Ontario Public Service Employees Union’s annual gathering at the Metro Toronto Convention Centre Friday, May 9.

The loudest standing ovation – which came when she promised to protect public sector jobs – was predictable given that PC leader Tim Hudak had just that morning declared in Barrie he was prepared to cut 100,000 if elected.

The banner above the escalators outside the convention hall read Together Toward Tomorrow.

But the labour movement is anything but together on whether Horwath and the NDP should have pulled the plug on the minority Liberal government and forced an election. All of a sudden the NDP leader is a lightning rod in a movement for which she’s supposed to be the standard bearer.

OPSEU president Warren “Smokey” Thomas attempted to address the issue after Horwath’s speech there was no avoiding the elephant in the room. Thomas singled out Ontario Federation of Labour president Sid Ryan for his now well-documented public anxiety over the NDP decision to go to the polls.

“I hope the Sid Ryans of the world come to their senses and realize that the reason the budget got voted down is because it’s not good for people,” offered Thomas as “Sister Horwath” waded into the crowd.

That characterization is quite a stretch. In fact, the Liberal budget promised a number of goodies labour has been advocating for years: an Ontario pension plan, more money for daycare and a minimum wage boost.

It’s a strange situation for Horwath, made stranger by the fact that OPSEU has historically been standoffish when it comes to the NDP, rejecting resolutions to formally back the party at past conventions.

The OFL, on the other hand, has been unabashedly pro-NDP. Ryan has run for the party no fewer than five times, a fact he’s quick to mention when division in the labour movement over the election call comes up.

Ryan argues that the NDP could have passed the budget and gone to the polls six months from now. And the next election was scheduled for only a year from now.

“Minority governments are when you make gains for workers,” argues Ryan, who says Liberal malfeasance, a theme of the NDP campaign, is not resonating at the doors he’s knocked on. “Nobody’s talking about the Liberals’ gas plants scandals any more.”

The NDP’s stated reason for going to the polls – that they’d lost confidence in the Liberals to deliver on their promises – comes off sounding disingenuous, it’s fair to say.

For example, the Libs’ promise to set up a financial accountability office, a particular sticking point for the NDP, turns out to be more a promise delayed than broken. Apparently there was disagreement over whether there should be a competition for the watchdog job.

The easier decision would have been for the NDP not to force an election. It’s no secret that there was debate on the subject between northern members of the caucus, who were more inclined to go to the polls, and their reluctant Toronto counterparts. But it was also the view within the party that it was time for the NDP to reflect more than the views of its Toronto base. If there are votes to be won, the thinking goes, it’s in the province’s southwestern corridor.

Those supporters in the 416 who might be angered by the NDP’s slight turn rightward will probably end up voting Orange anyway. At least, that’s the “hope” expressed by Toronto-area NDP MPPs. There may be potential to grow NDP support in other suburban pockets of the 416 where Ford finds solace. Howarth was in a Scarborough mall Tuesday, May 13 talking rising electricitybills with locals. The fact Premier Kathleen Wynne’s former chief of staff Tom Allison is engineering John Tory’s campaign against Olivia Chow in the Toronto mayoral race may provide some added disincentive for NDPers in the 416 thinking of voting for the Grits. Ryan seems willing to put aside his differences, campaigning in Windsor this week for the party, “We’re in it now,” he says, acknowledging that it’s Hudak who is the clear and present danger to labour.

But more to the point, how long could the party continue to take credit for wresting concessions from the Liberal minority before it would all become a blur in the minds of the electorate? The parties have historically fought for the same votes. Ontario’s electoral map is distinctly Tory blue in rural areas, and orange surrounded by Liberal red in urban.

If we’re to believe early polls on public reaction to the election call, Horwath’s personal popularity has taken a hit. The Liberal budget was tailored to make sure the political price would be steep.

Indeed, the NDP leader has been cast as a villain by lefty media and political observers who fear a repeat of what happened federally with the NDP and Jack Layton in 2005. Back then the NDP voted with the Conservatives to bring down Paul Martin’s Libs, and killed a national daycare strategy in the process.

Hudak’s hordes are promising to wreak Mike Harris-like havoc if they win a majority.

But since when is it the NDP’s job to outflank the PCs in their quest for votes? That’s the question many in caucus are asking themselves. Time was, the NDP was satisfied to be the province’s political conscience, or so the narrative advanced by dyed-in-the-wool Dippers goes. Now they want to win elections. It is politics we’re talking about after all.

Clearly, the language of the party has changed to formulations that fit more neatly into 30-second sound bites.

Horwath’s talk of reducing auto insurance rates instead of creating revenue tools for transit, for example, and small-business-friendly pronouncements on the minimum wage have prompted comparisons to Rob Ford’s right-wing populism. And sure, some of the folks she was snapping selfies with on the way out of the OPSEU convention could be confused for Fordists in another time and place. It took Horwath a good 15 minutes to wade through them on her way to the Chevy Suburban waiting to whisk her away.

To hear long-time Trinity-Spadina NDP MPP Rosario Marchese tell it, “The party has become smarter in how we do politics. We’re trying to speak in a way that’s sensitive to how people think.”

The NDP has done well in three by-election victories in Kitchener-Waterloo, Niagara and London, in each case beating Tories, not Liberals, whose vote had collapsed. Byelections aren’t the best measurement of party support. But the NDP victories are something to build on.

Worrisome for the party, however, is how closely the NDP’s fortunes are tied to Horwath’s popularity. There the trend has been downward since the high-watermark reached right after Liberal leader Dalton McGuinty’s resignation in 2012.

Horwath is no longer by far the most popular leader in provincial politics. And in a contest over who should govern, that scrutiny will only intensify. She’s got five more weeks to make her case.