At official launch of NDP's election platform, it was hard not to notice the Fordian catchphrases about respect for tax dollars 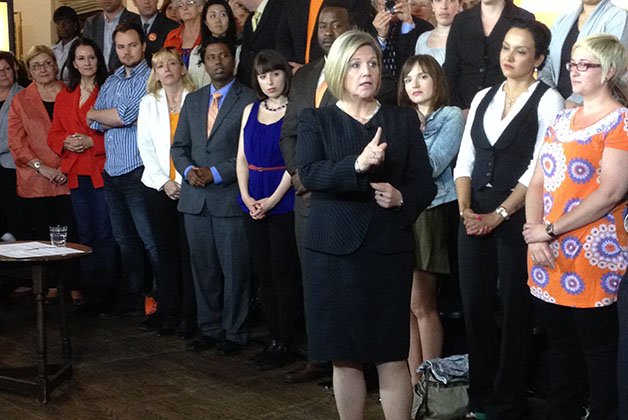 The timing couldn’t have been worse for NDP leader Andrea Horwath – is there ever a good time for internal divisions to be so nakedly exposed?

Yesterday’s release of an open letter signed by 34 prominent New Democrats expressing distress over the party’s populist turn revealed publicly in no uncertain terms for the first time the divisions that have been silently wreaking internal havoc on the party for months.

That most of the signatories, Michele Landsberg and Judy Rebick among them, are vets of class struggles past gave rise among some conservative and still NDP-friendly pundits to not-so-polite ribbing along the lines that the letter might actually give folks more reason to vote for the NDP. Only, is the NDPs’ going after PC votes (see front-page ad wrap in the Toronto Sun last week) really the way to grow the party’s appeal?

There’s also nothing funny really about the party taking for granted its vote-rich Toronto base, which currently accounts for a quarter of its sitting MPPs. Whether by coincidence or design, four of its five Toronto caucus members, save for Jonah Schein, were absent from the leader’s coming out party at Hart House Thursday to announce the NDP’s election platform.

It was a polished affair, which is to say it went off mostly without a hitch. The choreography was impeccable and Horwath on message, speaking without a teleprompter, which is noteworthy for the criticism she’s been taking during the campaign for being too scripted.

Alas, it was hard not to notice the one-too-many Fordian catchphrases about respect for tax dollars in Horwath’s presentation. The platform did contain a few goodies for old-time socialists: nutrition programs and access to dental care for kids some debt relief and a tuition freeze for post-secondary students. There was also talk of keeping schools open.

But its focus was mostly refried bits we’ve already heard on the campaign trail about reducing auto insurance rates and hydro bills – oh yes, and balancing the province’s budget and its $15 billion debt by 2017.

There was a pledge from Horwath during her speech on more funding for transit, a particular hot button in Toronto, but it ended there with no details.

The glossy handed out later outlining in more detail the party’s platform was just as vague on transit, promising only to “prioritize high impact transit projects” including the Downtown Relief Line and “Scarborough transit.”

On other platform planks, there were many similarities to be found with the Liberals, save a few details, which prompted more questions at a media availability later about why the NDP pulled the plug and triggered an election on a Liberal budget that’s being described as the most progressive in decades.

Here’s a reality-checked version of Horwath’s exchange with reporters on that and a few other hot-button issues:

What‘s the difference between your party platform and the Liberal budget?

Horwath: “I can give you the whole platform but I just made that speech.”

Reality check Horwath’s actual answer wasn’t that terse. She did offer examples of few differences. But when it comes down to it the main reason the NDP decided to go to the polls is very simple and came wrapped in Horwath’s answer to another question later: simply put party higher ups believe voters are tired of the Libs.

Horwath kept coming back to Liberal “waste and scandal” theme in her answers. Whether that message is resonating with voters is another question. The polls so far seem to indicate that it’s not, putting the NDP leader behind Kathleen Wynne on the all-important question on who voters think will make the best premier.

Is this [NDP platform] the Andrea Horwath version of stop the gravy train?

Horwath: “No this is the NDP version of respecting the tax dollar and delivering for people.”

Reality check Horwath got a chuckle out of that query, but there’s no mistaking the similarities in the newfound language of the NDP and the gravy train rhetoric of Rob Ford – or the fact the party plans to balance the budget by 2017-18, which is only one year removed from the scorched earth policy being advocated by the PCs’ Tim Hudak.

How does Horwath plan to make the big cuts that will be required to achieve that goal? She reiterated a promise to cap CEO salaries in the public sector before adding that there’s “much more savings to be found.” Where have we heard that before?

The party is promising to establish a ministry of savings tasked with finding $600 million in spending cuts every year. But more to the point, the NDP are only promising to rollback corporate taxes, already among the lowest on the planet, by one per cent, which seems a meagre amount for a party that has long railed about corporate fat cats getting a free ride on the backs of average folk.

The NDP are also talking about mergers in the energy sector to find savings, which unions fear will mean more layoffs of frontline workers more than in bloated management ranks the party is pledging to cut down to size. Horwath also mused during her press conference about deep-sixing the Drive Clean program, which is different than her original position to reduce fees for the car emissions program. The Libs have vowed to keep the program. The PCs want to kill it. And then the question everyone was waiting for:

Why did you abandon the made-in-Ontario pension plan [that] used to be a cornerstone pledge of the NDP?

Horwath: “I don’t think Ontarians will be fooled by the pension plan issue. I brought a pension plan to this province four years ago. Liberals ridiculed it. They voted against it.”

Reality check Horwath is right about the Libs voting against her pension plan. But her’s was a voluntary program. The program being proposed by the Libs goes further: it’s mandatory. More to the point, her explanation on why it doesn’t form part of the NDP platform – she says we might have a federal government after the 2015 election that’s “prepared to take seriously the crisis in the Canadian Pension Plan” amounts to deflection pure and simple. What if we don’t get a federal government keen on pension reform? Horwath says “There’s still plenty of time to look at the retirement savings plan for the people of this province and we’re certainly prepared to do that.”

Should be an interesting couple of weeks on the campaign trail.