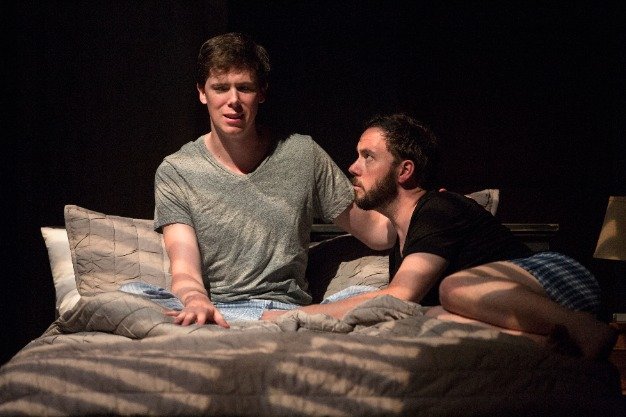 Tony Kushner’s Angels In America is a splendid, ambitious series of journeys through time and space, journeys that deal with moral, spiritual, professional, emotional and sexual realities that resonate far beyond the play’s late-1980s time period.

Kushner tracks on a huge canvas the lives, loves and misadventures of seven people in New York City in the age of AIDS and Reagan. The play’s two halves run over six hours, most of it smart, moving, funny, thought-provoking and sexy.

At its centre are two unhappy couples: Joe Pitt (Mike Ross), a sexually uncertain conservative, Mormon court clerk, and his pill-popping wife, Harper (Michelle Monteith), and gay partners Prior Walter (Damien Atkins) and Louis Ironson (Gregory Prest), the former dealing with AIDS and the latter not handling his lover’s condition well at all.

Joe’s tied professionally to Roy Cohn (Diego Matamoros), another closeted man and a powerful lawyer with connections everywhere. Cohn is also sick, which brings him into the hospital world of Belize (Troy Adams), a nurse who was Prior’s lover. Add to the mix Joe’s mother, Hannah (Nancy Palk), who moves from Salt Lake City when her son comes out to her, and finally an Angel (Raquel Duffy), who declares the dying Prior the prophet of a new world.

The cast of eight plays many others, figures who enter the action at odd but fascinating angles to offer comment or other viewpoints in this richly devised world.

On opening night the show took a while to catch fire, but from then on until the end of the second part it grew into an enthralling theatrical adventure, with Lorenzo Savoini’s costumes and multi-focused set, Bonnie Beecher’s lighting and Richard Feren’s sound contributing to the production.

The cast is strong, too, from Matamoros’s rough-voiced, crass Roy to Monteith’s angry, somehow innocent Harper, Adams’s sassy but nurturing Belize to Ross’s boyish, confused Joe. Prest’s troubled Louis never examines his emotions when he can go instead into his head, while Duffy is both an imposing Angel and a warm-hearted nurse. Palk’s Hannah is the definition of tough maternal love, and one of her other characters is a standout: the ghost of Ethel Rosenberg, who torments her killer, Roy, with a baby-girl voice and a hungry, vengeful glint in her eye.

But it’s Prior who should and does drive the play, and Atkins’s superb performance takes him from a scared, lost, needy man to someone who literally dons the mantle of Prophet and travels to Heaven to make his case for humankind.

Director Albert Schultz catches Kushner’s overlapping narratives and echoed imagery wonderfully, orchestrating a seamless flow to the story, which has simultaneously occurring scenes that parallel or contrast in terms of theme and action.

In one surprising episode, a late-night queer encounter in Central Park is literally woven through a bar conversation between Roy and Joe. Roy’s trying to convince the younger man to be his eyes in Washington, and there’s a strong subtext of sensual interest on Roy’s part as well as a father/son dimension to their relationship. Intertwining the two men on barstools with the pair having sex gives the scene added power.

Appropriately, direction and design meld throughout the production. A large bed at the centre of the stage is shared by Harper and Joe, Prior and Louis, Louis and Joe, and also transforms into other locations. A hospital bed used by Prior and Roy at different times is an adjunct to it stage right.

This kind of collaboration between director Schultz and set designer Savoini makes an impression right at the start of Millennium Approaches, the first half of the epic play. As the house lights go down, the eight actors enter in silhouette, pulling wagons and then unloading their contents onto the stage. The people look like the Jewish characters from the end of Fiddler On The Roof, finally arriving in America after fleeing their Russian village of Anatevkaand setting up their new life in a strange land.

And who speaks the play’s first lines? An old Orthodox rabbi, Isidor Chemelwitz (Palk, in one of her several roles as an aged man), offering words at the funeral of Louis’s immigrant grandmother. His text? That she and others came from villages in Russia and Lithuania, struggling and fighting for their families in America, “the melting pot where nothing melted.”

She carried her European traditions on her back, Chemelwitz continues, telling her descendants that each day they continue a version of that immense crossing, even though such a “Great Voyage” as hers doesn’t exist any more. Of course, the rabbi doesn’t know that her grandson, Louis, will make his own colossal expedition, but that’s just what Kushner is setting up, and Soulpepper’s production catches that point – admittedly only in retrospect – brilliantly.

Though the writing in the second act sprawls at times and could be more concise, Angels In America treats us to vividly drawn characters who travel along fascinating paths. Soulpepper’s production compellingly draws viewers into this funny, rich play, one that shouldn’t be missed.