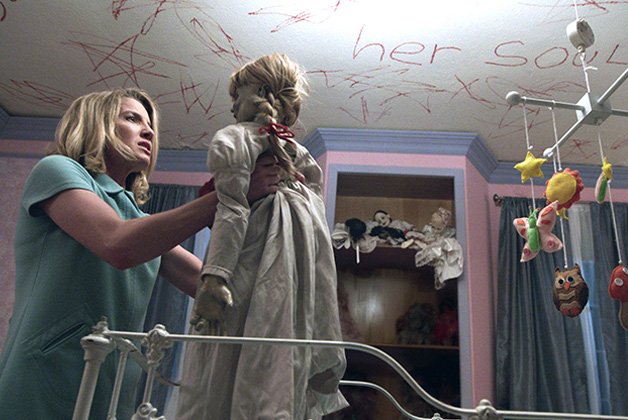 After The Conjuring scared up big box office last year, studio execs likely wondered how they could milk more moolah from it quickly. Which explains Annabelle, a thin, derivative film that fills in the backstory of a demonic doll kept mostly in a case in the first film.

Fleeing a creepy incident that happened to them in Santa Monica, young couple Mia (Annabelle Wallis) and John (Ward Horton) relocate with their new baby to Sacramento to live in a building that looks like the one from Rosemary’s Baby, complete with spooky basement. (The fact that their first names are the same as the two leads from Rosemary’s Baby, Mia Farrow and John Cassavettes, is obviously an in-joke.)

Before you can say the words “paranormal activity,” the eponymous doll – which John got his wife as a gift – begins making doors close and chairs move, freaking out Mia and making John question her sanity. Alfre Woodard plays a neighbour and confidant who owns a bookstore and gives Mia a book on the occult. How convenient, right?

Director John R. Leonetti uses some odd angles to generate suspense and unease, and the film – set in the early 70s, with Manson mania in the air – looks good, particularly in a disorienting, frightening scene in that basement. Woodard says her few lines with commitment, but the two leads are attractive yet bland, lifelike Barbie and Ken dolls.

What’s more head-scratching than a demonic doll, however, is the fact that though the couple moves 400 miles away, they continue to attend their old church. That’s a long way to go for a bit of spiritual guidance.