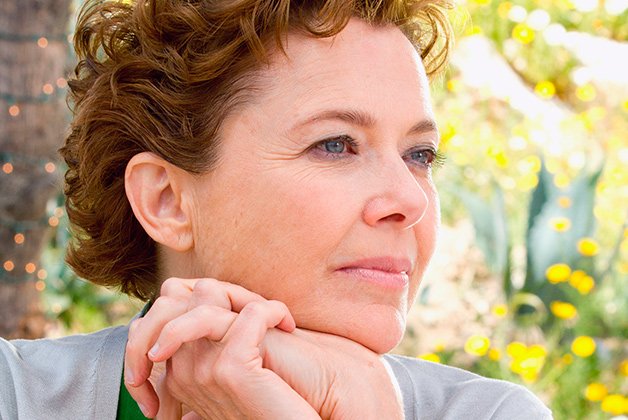 Onscreen, Annette Bening has always been a natural control queen, whether it’s her flashing-eyed hustler in The Grifters, the adulterous, greedy wife in American Beauty or the micromanaging physician partner of the flaky Julianne Moore in The Kids Are All Right.

So it’s fascinating to see her let loose and be vulnerable in The Face Of Love, Arie Posin’s absorbing psychological drama. She plays grieving widow Nikki, who enters into a relationship with Tom (Ed Harris), a dead ringer for her husband, even though she knows it can’t possibly end well.

“That word ‘vulnerability’ is important to me,” says Bening during the film’s world premiere at the Toronto Film Festival. “As an actor, it’s your job to let yourself be open. But maybe there’s something in the psyche that wants to protect you. I tried really hard to imagine what it was like to go through what this woman goes through.”

It obviously worked. Bening is spectacular as a woman who lives in a sort of dream world where she sees what she wants to see.

Drinking a cup of tea and looking calm, grounded and confident, Bening says her character’s situation is extreme, but we all engage in this sort of behaviour.

“We’ve all thought, ‘Be that person I imagine you to be, because that’s the person I’m in love with!'” she says, laughing. “It’s about projecting onto a person what you need them to be. We don’t mean to hurt or use each other in life, but we do, because our own needs dominate our sense of well-being.”

Entering the skin of a middle-aged woman falling in love was a bit of a challenge for her, she says.

“There’s a scene when Nikki asks [Tom] to come to her house, and since I’ve been married for over 20 years, I haven’t been in that situation in a long time,” she says. “But I have friends who are divorced or who have lost their spouse. One of my best friends is with a newish boyfriend. I think it’s the same and different [when you’re older]. You have all these years of life experience, and yet that insane falling-in-love thing happens: it’s what every song and all these stories are written about. That’s just the same.”

She doesn’t worry about the dreaded over-40 curse for female actors. It’s telling that three of her four Oscar nominations were for roles she played when she was past 40.

“I’m selective about what I do, because I can be,” she says. “I’m fortunate. I also do plays. I often don’t work because of my family. But I find that when I’m ready and something comes along, I jump at it and really get excited.”

And getting older and more experienced presents new challenges.

“When you’re younger, you think there’ll be a point when you imagine no longer searching and wondering [about your career],” she says. “But guess what? It never happens. You just reach a new plateau. It’s like you climb up and see different vistas that open up.”