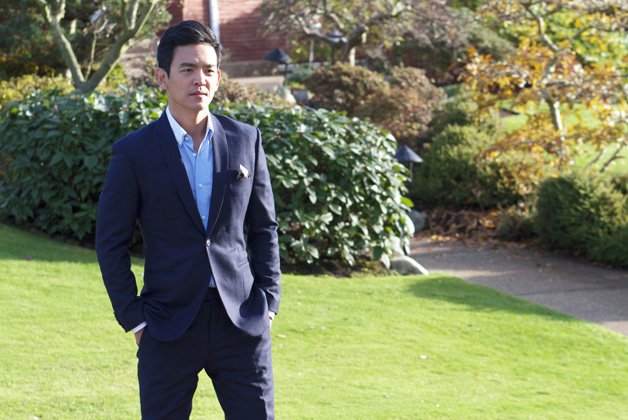 You’ve seen John Cho in a bunch of stuff: alongside Kal Penn in the Harold & Kumar trilogy as a confident, kick-ass Sulu in J.J. Abrams’s Star Trek reboot and in such small-screen gigs as Kitchen Confidential, FlashForward and Sleepy Hollow.

But you’ve never seen him dance his way through a picture.

That Burning Feeling gives him the chance, casting Cho as the movie’s slightly deranged villain. His condominium developer, Roger Whitacre, seems to be doing a soft-shoe to music only he can hear.

It’s a nifty choice for the role, which Cho credits entirely to director Jason James’s suggestion that he consider the designer Tom Ford as Whitacre’s spirit animal.

“I ended up watching a documentary about him and was really fascinated,” Cho recalls. “He’s very serene but also self-obsessed. Did you know Tom Ford takes five baths a day?”

I did not know that, I have to admit. Where does he find the time?

“You’re Tom Ford – you make the effing time,” Cho laughs. “I was so taken by him, so I stole little bits and pieces from the documentary and ran with it. Jason was kind enough to allow me to amuse myself in front of a camera.”

Were there any other things he folded in there?

“[Whitacre] is maybe a sociopath,” Cho says. “I don’t know what his mother and father did to him to make him love himself so much, but he just lacks empathy and is convinced that everything he does is pure and right.”

The movie gives his character the standard land-baron motive of tearing down a community centre for a new condo development. The gentrification angle resonated with Cho.

“I’m experiencing a similar thing on the east side of Los Angeles,” he says. “It’s not condos, but it’s historically been a Latino neighbourhood, and it was a gay neighbourhood, and they’re renters. So sometimes I wonder, ‘Okay, I own a house here, so it’s ostensibly good for the neighbourhood,’ but people are being displaced for this to happen. There’s a human cost, and it’s not entirely visible to me, but you know it’s there.”

Currently, Cho’s waiting on a script for the next Star Trek movie and wondering whether he’ll have a new TV gig in the fall. He and Doctor Who’s Karen Gillan have a pilot for a series, Selfie, at ABC.

“I’m expecting news in maybe a couple of weeks,” he says. “It’s a romantic comedy, and that’s not something I get the opportunity to do much on TV. I hope it goes. But you never know.”

John Cho on the trick to playing a comedy sociopath:

Cho on how the project found him:

Cho on his admiration for his co-stars: