Former TCH head Gene Jones – the “turnaround specialist” with the hyped U.S. resumé hired by Rob Ford to sell off social housing – proved in the end to be way out of his depth 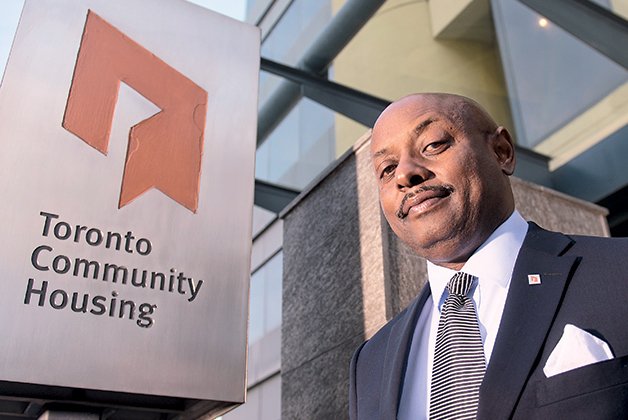 The unceremonious dumping of Gene Jones as president and CEO of Toronto Community Housing last Friday, April 25, is not exactly the MFP computer leasing scandal of a few years back, but it’s pretty darn close.

Jones’s tenure has proved to be a very expensive mess for the city and the housing corporation. Aside from the $200,000 handshake he received, there’s the $1.6 million more in buyouts to get rid of people he didn’t like. And potential millions more in legal costs from the mass firings under his watch. Word is, the departure of former chief operating officer Kathleen Llewellyn-Thomas after only four months on the job was more than professional.

City Ombudsman Fiona Crean’s report on Jones’s dictatorial running of the organization, which sounded the death knell for his tenure, has been described as scathing for what it says about Jones’s management style.

But it’s worse than that. It documents missing records, questionable hirings, firings and promotions, potential conflicts of interest and a TCH board kept in the dark about it all.

In another life Mayor Rob Ford would have called it corruption or a cover-up. Except Jones was Ford’s guy, so when the axe fell the mayor resorted to doing what he always does when his best-laid plans have failed. He tried to rewrite the story, going on Toronto Sun scribe Joe Warmington’s late-night radio show on Newstalk 1010 to exalt Jones’s performance and call for Crean’s head.

The mayor wasn’t about to state what had become obvious to most people – that Jones thought he could run the social housing provider like his private fiefdom and fire anyone who got in his way, which is pretty much what he did, with the mayor’s blessing.

Ford had big plans for Jones. Ostensibly, he was hired in 2012 to clean house on the pretext that TCH was rotten to the core, part of that fictitious gravy flowing through the entire city and its various departments. See city auditor Jeff Griffiths’s manufactured spending-scandal crisis at TCH shortly after RoFo took office, which led to the mass resignation of the TCH board.

The real scheme was to privatize and sell off TCH piece by piece. Remember that voucher system under which social housing recipients could be housed in privately owned apartments that the mayor talked about during the 2010 election?

The sell-off was averted after Ford was politically weakened by various other scandals, and he soon realized that selling off TCH meant pissing off a fair chunk of his electoral base in Ford Nation. Crucially, the city would need the province’s approval to unload its stock, and the hoped-for PC government never materialized. After that things quickly changed for Jones.

He went from architect of change to empire builder and master of symbolic gestures, showing up for ribbon-cutting ceremonies and on the doorstep of tenants whose leaky pipes needed fixing. Problem with that was that there were another 50,000 people on the waiting list for repairs.

What was needed was systemic change, not a Mr. Fix-it. It wouldn’t be a stretch to say chronic neglect has put residents’ lives at risk, according to some TCH board members.

Jones ran roughshod over the rules, chopping off the heads of those who didn’t toe the line so that others in senior management would learn not to question him. Think Sun Tzu and The Art Of War. That’s how one former senior exec at TCH described Jones’s management style.

In the end it wasn’t just Jones’s twisted methods, what Crean characterized as “abject failure of leadership from the top,” that got him removed. Or the fact that he came to TCH with decidedly American corporate experience and little regard for Canadian employment laws or standards.

Jones was simply out of his depth. He really had no experience when it came to running an organization as large and complicated as TCH.

We got an inkling of that when the board sent him to management school in February after news first started filtering out about the disorder at TCH.

The turmoil caused by massive turnover at the public housing provider meant that repairs were often delayed or not done at all. Councillors report having to reapply several times for repair work at TCH buildings in their wards, even when there was money in the budget to cover it.

Jones also seemed to play favourites. His promise to fund repairs for residents who came forward with information on criminal activity in their neighbourhood was just the tip of the iceberg.

Somewhat lost amid last week’s coverage was Crean’s report released in March about TCH’s failure to keep her office notified of evictions involving seniors despite a directive by council requiring TCH to do so after the highly publicized death of Alan Gosling in 2009.

Jones certainly wasn’t saving TCH any money, asking the cash-strapped organization to drop $2 million last October on office renos and complaining to the board that his digs were too small.

His resumé notes that he was a “turnaround specialist” at public housing agencies in the U.S. It’s unclear to what extent he led “transformational change” – the words used in a TCH release announcing his hiring – south of the border.

Much was made of Jones’s work with the Detroit Housing Commission, but there are more public housing units in some wards in Toronto than there are in all of Motown.

From the start there was confusion between what Ford wanted and what the TCH board was looking for with his hiring. It wasn’t wholesale changes that they wanted. In fact, it was made clear when Jones was hired that there would “not be a massive restructuring of the company,” according to TCH board chair Bud Purves.

Not all the blame can be laid at Jones’s feet. Senior levels of government have abandoned social housing. Some councillors suggest that it may be time to consider going back to pre-amalgamation days and breaking TCH into smaller, more manageable pieces.

The irony may be that the guy brought in to take the city out of the social housing business may end up being the best argument for a more responsive public provider.

It’s been a head-spinning couple of years for an organization that only a year before Jones took over was named one of the top 100 employers in the country.