Another night of debauchery for Rob Ford 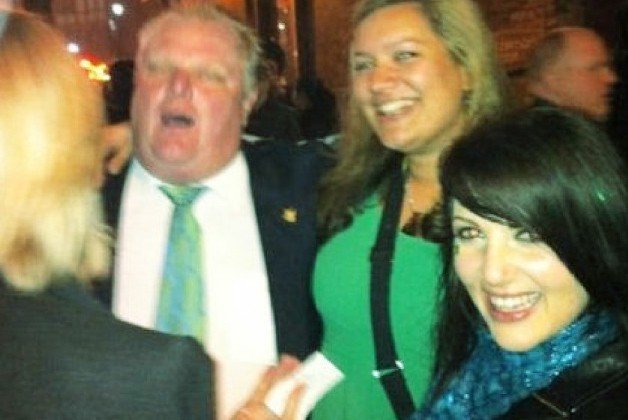 The other time Rob Ford got hammered on St. Partrick's Day in 2012 he reportedly ended up at City Hall with two female companions.

1. The mayor apparently has enough sense not to drink and drive anymore when he gets hammered. In the latest video filmed Saturday night outside City Hall the mayor is clearly heard saying he needs a ride home before swearing and getting into a cab, which could just mean he was too shitfaced to find his SUV. Maybe he’s finally made good on his mother’s promise to install a breathalyzer in his vehicle. Wishful thinking perhaps. The more likely scenario: he can’t risk being pulled over by the cops now that he’s in the thick of an election race and the number of friends he has on the police force, it can safely be said, has dwindled since he became the target of that drugs and guns probe. The boys and girls in blue may not be so willing to escort him quietly home as if nothing happened, like they used to in the good old days.

2. Brother Doug may run the show at City Hall but he really doesn’t have a clue what little bro is up to in his private life. Check the news reel of a CTV reporter’s attempts to get a reaction from Doug at the St. Paddy’s Day parade Sunday to Rob’s latest episode. It’s painful to watch. Oh sure, Doug knows Rob is in the habit of drinking ’til he’s three sheets to the wind. But he’s not his brother’s keeper. Why should he be? If anything Doug’s the one driving Rob to drink. Think about it. Rob’s pissed off at Doug for getting him into this mayor thing in the first place. Rob would have been happier being councillor for life, living in relative anonymity in the wilds of Etobicoke without the burden of having to watch his every step, or snort of coke in public, if Doug hadn’t convinced him to run for mayor.

3.That “come to Jesus moment” Ford talked about last fall after council’s move to strip him of his powers was no epiphany. We suspected as much. But when Ford started showing up for church on Sundays – albeit allegedly smelling like he just smoked as little reefer on one occasion – Toronto collectively held out hope, whatever our political differences, that he was at least trying to straighten his substance abuse issues out. Now Ford’s back to the point where he doesn’t even try to deny that he sauces when the mood strikes, which judging by the photos and video that keep popping up on social media, continues to be fairly regularly. “Were you drinking last night? You never drink right?” was Ford’s non-denial denial to a CTV reporter’s question on whether he was imbibing Saturday.

4. Ford continues to be in denial. Most of us indulge in recreational activity so to speak to take a load off. Rob’s way of handling stress is to go on binges or a major bender. Those are not coping mechanisms. They’re clear signs of an addiction problem. With Ford the drinking usually leads to other trouble, like his ending up in the basement of a crack house smoking rock, or caught on video threatening to kill people, or calling the chief of police a cocksucker in Jamaican patois. That personally tailored sidestep program he’s on that was supposed to help him clean up his act ain’t workin’.

5. It’s so over for Ford that it isn’t funny anymore. The familiar refrain every time there’s another embarrassing detraction involving the mayor is that it means nothing to his supposed legions in Ford Nation. But his drunken stupors aren’t funny anymore, not even to his devoted disciples. The woman who turned over the latest video to CTV describes herself as a big fan of the mayor. She’s overheard on the video calling him “awesome.” Not so much, apparently. Whatever profanity Ford uttered as he was getting into his cab turned her off enough to reconsider her opinion. Even Ford Nation types are beginning to suffer from Ford fatigue it seems.