NOW MagazineNewsAnser: Behind the mask

Anser: Behind the mask

Anser, one of Toronto's most secretive and. 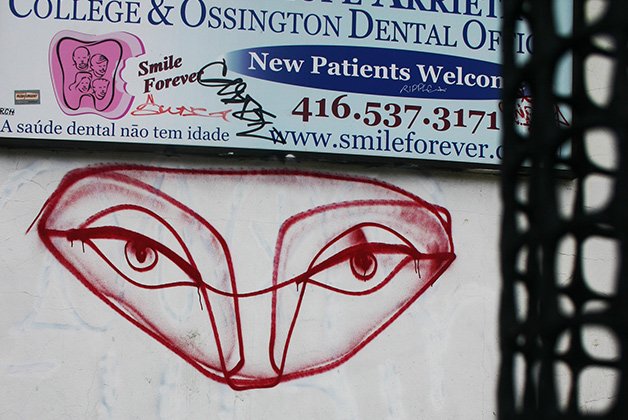 Anser, one of Toronto’s most secretive and iconic graffiti writers, doesn’t give many interviews.

However, in advance of a show opening tonight (Thursday, February 27) at Hashtag Gallery (801 Dundas West), the artist has agreed to speak about her work and the misconceptions surrounding Toronto’s oft-maligned graffiti culture.

To protect the artist’s anonymity, Anser has asked us to arbitrarily choose a gender to represent her in this article.

“I don’t like lying to people or hiding who I am,” she says. “But there’s also something compelling about anonymity. It makes the work about how people respond to the image rather than about some personality cult of the artist.”

On Mysterious Date, her signature graffiti bomb of minimalist portraits.

“These build on the idea of the face as a mask. When you look at someone’s face, you’re seeing just that, a surface. A person’s appearance and what’s inside that person are often two very different things.”

“Inherent in all graffiti art is a critique of capitalism – specifically our society’s obsession with property. That’s why I prefer to tag banks and government buildings – especially because the cost for them of painting over a couple of quick spray-painted lines is so minimal.”

On our advertising culture.

“Part of why I paint is to try to reclaim some of our visual terrain for the public, to create an image that isn’t inherently commercial and helps people identify with their city.”

On communicating rather than alienating the public through graffiti.

“While I love graffiti, it’s often painted in very coded letter-based forms that mean nothing to people outside the graffiti world. But graffiti has traditionally been a way to empower young people without a voice.”

On her decision to create graffiti work for an indoor exhibit.

“Graffiti belongs in the streets. One of the best things about it is that it doesn’t last – it resists ownership. By using unique surfaces from our urban environment [including brick, canvas, plexiglass, vinyl and found objects], my gallery pieces are as true as possible to the medium while at the same time becoming something wholly different.”