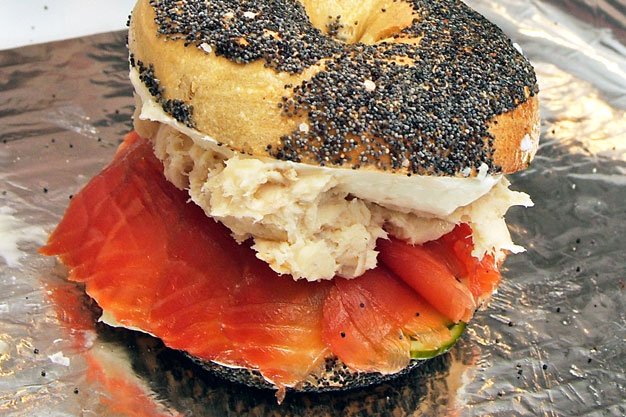 Anthony Rose (right) takes pride in the array of fish at Schmaltz.|Cream cheese

These large, orangey-red fish eggs are bursting with salty and briny juices that can be best described as sharply ocean-flavoured. You’ve probably seen them in higher-end sushi restaurants where they’re called ikura.

“I keep it simple and eat them with an everything bagel [with poppy and sesame seeds, garlic, onion and salt] and just butter,” says Rose. “Plain butter and caviar is the best in the world.”

Let’s get this out of the way: the difference between gravlax and smoked salmon is that, while both are salt-cured, gravlax isn’t smoked.

Rose makes gravlax by first curing the fish by covering it with a mixture of salt and sugar and letting it marinate for three days. The salt and sugar permeate the fish, adding flavour and drawing water out, inhibiting bacterial growth and preventing it from rotting – what people did before the invention of refrigerators.

Then it’s rinsed off and rubbed with lemon zest and chopped dill and allowed to rest for another day. It’s milder than its smoked counterpart, and the lemony dill helps cut through the oily fish taste.

Like its lemon-dill cousin, this salmon is also preserved in a salt and sugar solution for three days, but grated beets are added to infuse a blush and hint of sweetness. Best for those who don’t like dill or the smokiness of smoked salmon.

Those who’ve only tasted caviar in California rolls will find the roe of the American paddlefish odd, but it’s Rose’s favourite.

“It has this intense muddy flavour, and I love it,” he says.

The eggs are mushy and have a deep, buttery dirt flavour that leaves a bittersweet aftertaste. You’ll either love it or hate it.

As we’ve established, smoked salmon is gravlax that’s been smoked for a richer, deeper flavour. There’s no beef in this pastrami. Rather, it contains spices used to make pastrami – peppercorns, cumin, coriander, brown sugar, white pepper and juniper. The ground spices are added to the curing mix and rubbed on the fish again at the end, giving it a spicy, peppery kick.

What’s cold-smoking? Fish is exposed to smoke at very low temperatures so it won’t cut, but just be infused with a smoky taste.

Supplied by Wolfhead Smokers of New Brunswick, this salmon is raised in the icy waters of the Bay of Fundy and is fattier and more buttery-tasting than gravlax and the shop’s other types of cold-smoked salmon.

This prehistoric-looking 6- to 8-foot-long fish has a long snout and bony plates rather than scales, so, fittingly, it doesn’t taste like most fish. When cooked, it’s not flaky and has a firmer, meatier consistency comparable to chicken. It tastes more like a very mild-tasting white meat than fish.

Rose recommends pairing sturgeon with capers, little pickled flower buds that have a salty and vinegary punch. As you’ve guessed, “hot-smoked” refers to exposing the food to smoke at high enough temperatures to actually cook it in addition to infusing a smoky taste.

A hint of maple syrup added during the cooking process adds a delicate sweet aftertaste. It’s around the same level of fishiness as the hot-smoked salmon.

While it’s prepared the same way as the trout filet, the whole version doesn’t taste as salty and fishy since less of the flesh is exposed directly to the curing mix.

Whitefish, commonly found in Canadian waters, is generally known for its non-fishy and slightly sweet flavour, preferred by those who aren’t particularly fond of fish. It goes well with the watery crunch of cucumber slices and tartness of cream cheese.

Popular at breakfast in Edwardian Britain, kippers are fish (usually salmon or herring, though purists say it’s more often herring) that’ve been splayed open, cured and smoked. While still moist and flaky, they’re not as oily as the cold-smoked version.

While carp doesn’t sell as well as salmon, it’s Rose’s favourite fish at the shop.

“I grew up eating bits and pieces of carp at Hanukkah lunches, but over the years I saw less and less of it being served. It has an inherent fattiness, so I’d go simple with just cucumber and tomatoes on a bagel,” says Rose. “Cream cheese would be too much.”

Mild like whitefish meat, whitefish caviar doesn’t have as intense a flavour as other briny roe. It’s still salty with hints of seawater, but not as pungent as paddlefish or salmon. It has the familiar crunch of tobiko.

The tiny eggs of the flying fish, familiar as toppings on California rolls, are what most people think of when it comes to fish eggs. Their natural colour is orange, but the added wasabi gives them a green hue and that familiar sinus-clearing effect.

The very oily and pungent fish that’s most associated with Scandinavian cuisine, as well as Jewish food, packs a lot of flavour in a little filet that’s kept in olive oil for a smooth mouth feel. Contrast its oily taste with the zing of raw onion, sour cream, cucumber and chopped dill. Rose’s herring is supplied by Thornhill-based catering group Elite Salads.

Caught just before spawning, this is the fattiest and creamiest herring of the bunch, which is why it got named after chicken fat. Its very rich and lingering flavour is best paired with vodka and a steam bath.

Also called soused herring, matjes has a sweet, almost fruity and wine-like aroma after being soaked in vinegar.

This traditional Jewish dish is essentially a fish sausage: chopped whitefish mixed with onions and spices like chili and turmeric. Think of it as a cod cake, but without the coating and sweeter and better. Rose got the recipe from local cookbook author, instructor and food columnist Bonnie Stern.

When people think of rich-people eats, sturgeon caviar is what comes up (this 50g tin costs $120). How does it taste? Rose cracked the tin open and spread some on a buttered bagel. It’s slightly nutty, with a fresh, salty top note, so you can see why the little onyx beads are so coveted. However, a little goes a long way: we split half a bagel and it was still too rich for us.