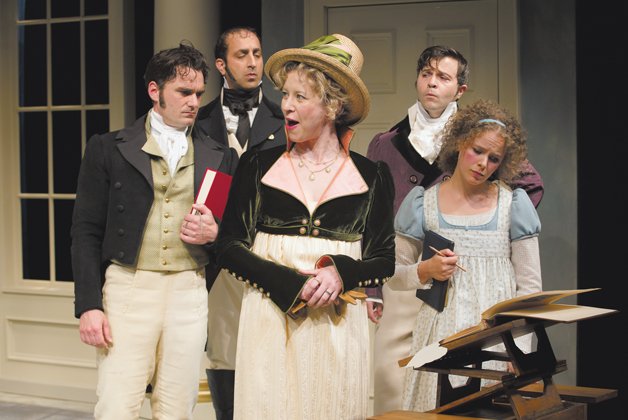 A blend of wit, philosophy, English gardens, Lord Byron, algorithms and sex, it opens in 1809, when the young, intellectually precocious Thomasina Coverly (Kate Besworth) is tutored by Septimus Hodge (Gray Powell), who’s not above dallying in his spare time with various older women in the household. A challenge to a duel, major renovations to the house’s classical garden and some eviscerating literary criticism are also part of the plot.

Jump to the 1990s in the same room, where antagonistic researchers Hannah Jarvis (Diana Donnelly) and Bernard Nightingale (Patrick McManus) are riding their particular hobbyhorses: she to discover the identity of a hermit who lived in the estate’s 19th-century faux hermitage, he to reveal a surprising part of Byron’s history.

As characters in both time periods go at each other, aiming at seduction, disparagement, manipulation or simply to show off, Stoppard’s one-liners, entertaining and expertly phrased, have the ring of Oscar Wilde. When, in the final scene, the two worlds come together, the effect is magical, the sometimes parallel actions of the periods joining in a single, satisfying conclusion.

Director Eda Holmes’s production is just as spot on, the Shaw Festival acting ensemble relishing the filigreed narrative, the language, the innuendo and the talking at cross-purposes, gently underlining the script’s playfulness as well as its intellectual discussions.

It’s hard to cite standouts in such a talented company. Andrew Bunker gets lots of laughs as a stuffy poet with an easily stroked ego and a wife whose lascivious actions he chooses to ignore, while Nicole Underhay is delicious as the dictatorial lady of the manor whose smouldering sensuality erupts more and more as the action progresses.

Equally fine are Donnelly’s fiery Hannah, McManus’s increasingly nasty academic and Powell’s inventive tutor, who can talk his way out of just about any awkward situation.

And what a treat to see a pair of young performers – Besworth as the effervescent, energetic Thomasina, unaware of the scope of her mental abilities, and Harveen Sandhu as her modern counterpart, vivacious and sharp-tongued – the equals of the more experienced actors.

Too bad this wonderful production’s pretty well sold out for its run. I’d love to see it return to the Shaw in a larger theatre.