Are bees still in trouble? Does buying organic honey help?

Q: Are bees still in trouble? Does buying organic honey help? [rssbreak] A: Four years after we started getting swarmed with the. 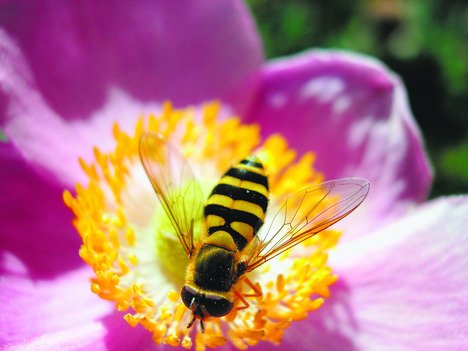 A: Four years after we started getting swarmed with the term “colony collapse disorder,” sadly, bee disappearances are still mounting.

Billions of honeybees in particular are said to have died since 2006. Canada hasn’t been as uniformly affected as countries like the U.S. But our honeybees have nonetheless declined 30 to 40 per cent annually for the last few years.

Worldwide, experts have fingered everything from viruses and fungi to cellphone signals and genetically engineered crops as the cause. Researchers at U of Guelph say the mystery, in Ontario anyway, is pretty much solved. They recently pinpointed blame for 85 per cent of colony deaths here on pesticide-resistant mites.

The Swiss Bee Research Centre and others say the development of super-bugs should be no surprise since mite-controlling pesticides are used on the hive and actually linger in the wax, propolis and, yes, honey, allowing mites to slowly develop resistance.

Instead of searching for newer, more potent pesticides (do we really want to keep our bees on the pesticide treadmill our crops are on?), how ’bout we focus on other solutions?

Supporting organic honey is actually a really smart choice, especially considering that organic mite controls have really helped limit infestations. Not only do certified organic apiaries turn to botanical and organic pest and disease controls first (natural menthol, folic and lactic acid), but they follow preventative strategies like bringing in a healthier queen, strictly avoiding antibiotics and maintaining sustainable harvesting practices, as in not killing off colonies after honey is harvested.

Now, I know some of you have raised an eyebrow about organic honey in the past, asking, if a bee can forage as far it likes, how can you control whether it gathers pollen from organic or non-organic sources?

Well, just as buckwheat or blueberry honey apiaries place their hives in fields growing those particular plants to get a distinctive flavour, organic beekeepers place their hives on an organic farm or at least have to prove that foraging sites within 3 kilometres on all sides aren’t sprayed with banned substances.

Organic wildflower honey, for instance, must be harvested from hives surrounded by a diversity of unsprayed flower fields. And that’s especially fantastic for two reasons.

One, the agro-pesticide-laced pollen brought into hives by busy worker bees has been found to weaken bee immune systems, so buying organic honey supports stronger bees.

Second, French researchers found that bees feeding on a diverse mix of pollens had healthier immune systems than those raised in large monoculture zones containing kilometre after kilometre of crops like oilseeds. That same reasoning is partly why urban gardens are fantastic spots for wayfaring bees.

We all need to put out the bee welcome mat, particularly since, aside from honeybees (actually European imports), our own native bees, of which there are 800 species in Canada and 150 in Toronto, are also in grave decline due to vanishing habitat. (For more on the decline of all bees worldwide, pick up Keeping The Bees: Why All Bees Are At Risk And What We Can Do To Save Them).

Ditto for other important pollinators like butterflies, wasps, birds, beetles and moths. And, no, it’s not too late to plant a pollinator-friendly garden or balcony!

You don’t need a ton of space to attract pollinators – even a few flowerpots or window baskets will do. The brighter the flowers, the more irresistible they’ll be. But don’t simply opt for the usual garden varieties, since, according to Pollination Canada, they often lack accessible nectar or pollen. Go for native or heirloom first, especially since many pollinators depend entirely on native plants.

Plant your flowers in clumps so they’re easier to track down, and get a mix of smaller, tightly clustered flowers accessible to shorter tongues and deeper flowers better suited to pollinators with longer tongues.

Some surefire winners are black-eyed Susan, milkweed, goldenrod, and aster. Evergreen Brick Works has a nursery rammed with pollinator-drawing plants that’s open daily, or check out its native plant database for a full list of plants native to your region (nativeplants.evergreen.ca).

And you don’t want to hang bees and butterflies out to dry. Give them a small bowl or pan of water with sun-bathing rocks at ground level. If it’s shallow enough to evaporate by day’s end, it’ll avoid becoming a stagnant mosquito brothel.

For a roof over their heads, build a bee house: google DIY plans, order one via pollinatorweek@gmail.com or just leave some exposed ground and hollow stalks lying around. (Don’t be obsessive about tidying your garden – even fallen leaf cover counts.) And I know I don’t need to tell you to stay away from chemical pesticides.

Follow all the above steps and make pollinators your happy neighbours. The David Suzuki Foundation says they can triple the yield of fruit and veggies in your garden. You’ll certainly double your green karma.