Are we killing Yonge Street?

Toronto's main street is sustained by comings and goings from shops, cafés and bars at street level, but this synergy is disappearing as narrow-fronted businesses are swallowed up by development 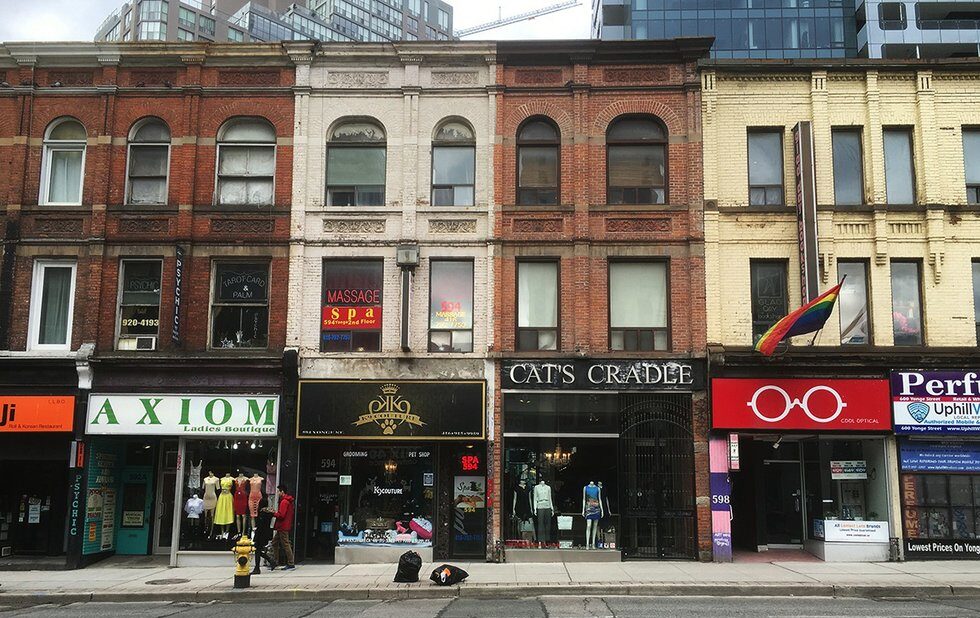 Downtown Yonge Street isn’t what it used to be.

The high energy of street life is fast disappearing. There are not many people around. We rarely walk far along the street because it lacks a sufficient variety of shops or range of sensory experiences to tempt us.

We do most of our specialty shopping and eating elsewhere. We do our chain-store shopping in the Eaton Centre and the many other interior malls linked by the underground PATH network that are vacuuming the life and the paying customers from Yonge.

The Bay and Saks Fifth Avenue (which occupy the old Simpson’s store) are still in full-blooded conversation with the street. Yonge-Dundas Square and Ryerson U have made a big difference, but their energizing effects seem locally concentrated.

The condo invasion has hit Yonge, but oddly, the hyper-densities haven’t added much public life to the street.

The key to Yonge Street’s success has been the rows of independently operated, narrow-fronted shops and businesses that collectively support intense social and commercial activity. What sustains Toronto’s main street are the many comings and goings from shops, cafés and bars at street level and the offices, showrooms and apartments on the upper floors. Entrances occur every few metres. There’s an intense synergy between the repetitive building type and the street. But this synergy is disappearing as buildings are stuffed and preserved in a lifeless trend I call urban taxidermy.

The stretch just south of St. Joseph is typical of this trend. Seven independent shops and businesses and approximately five apartments or businesses on the upper floors are all accessed directly from the street. That is, 12 sets of comings and goings from 60 feet of frontage on Yonge. 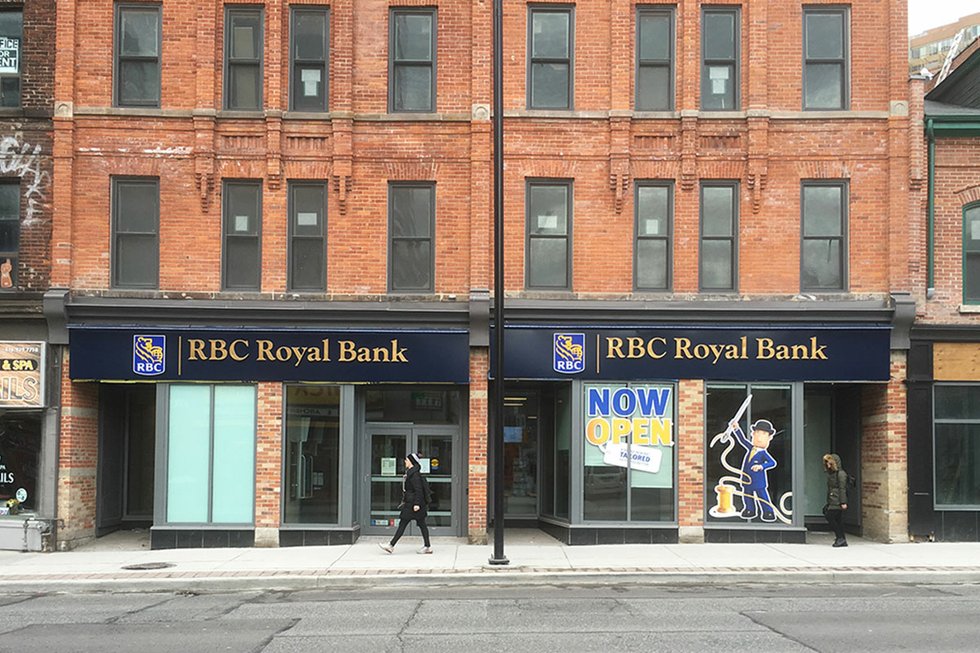 Further north on the same block, four similar narrow frontages are combined and integrated into a much larger redevelopment that extends along St. Joseph. The backs of the buildings have been severed and the fronts “restored.”

Where once there were many independent stores, there’s now one bank at ground level with a single entrance (corporate double doors) and three non-entrances. Above, with no apparent means of access, are probably apartments entered from the condo building’s lobby in the back, definitely not generating foot traffic on Yonge.

Similar urban taxidermy continues between Front and Wellington in BCE/Brookfield Place. The old Bank of Montreal, now the Hockey Hall of Fame, is a wonderful Beaux-Arts pile that has a grand portico addressing the street corner and all the architectural trappings intended to make you feel important about making an entrance.

But at the beautifully crafted bronze front door, a sign reads, “Proceed to 10 Front Street for entry. Once inside take downward escalator to admissions on the concourse level.”

The Mövenpick Marché Restaurant a little further up Yonge combines several frontages of old three- and four-storey Edwardian buildings. Their facades are lovingly conserved, the storefronts’ architectural individuality maintained, yet their doors are signed “no entrance”: the restaurant is accessible only from the Galleria inside. 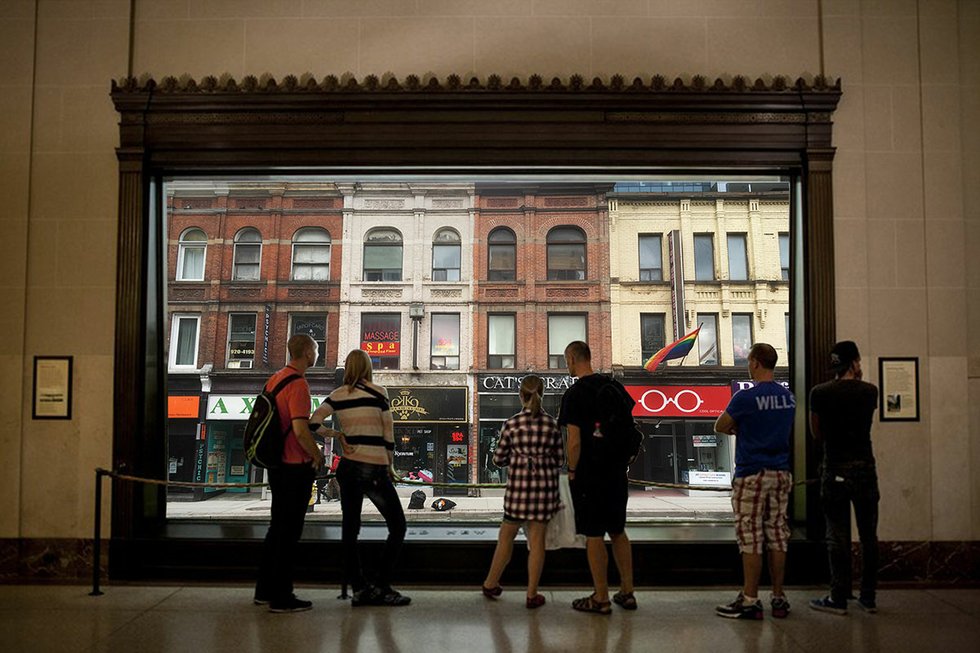 The idea of preserving the front 10 metres of narrow-fronted commercial buildings at the base of high-rise development is now enshrined in the recently completed Yonge Street Heritage Conservation District Plan.

An example is the redevelopment underway at Yorkville Avenue. The front parts of the heritage buildings and their storefronts are to be kept and restored while the upper floors are transformed into extensions of the new condo units in the tower behind.

How many independent retailers will occupy the abbreviated street-level shops is unknown, but my guess is the Cookbook Store or anything like it will not be back.

What we are getting is urban taxidermy. So what is this?

I turn to the Oxford English Dictionary: taxidermy, it says, is the art of preparing, stuffing and mounting skins of animals for lifelike effect.

My definition of urban taxidermy: the art of preserving, stuffing and mounting buildings for lifelike effect to simulate an intrinsic social, cultural or commercial vitality.

Urban taxidermy seems to be the most popular current compromise between complete heritage preservation and massive, wholesale redevelopment. Instead of facades, we are keeping large pieces of a building’s fabric, but what remains gives only the illusion of a vital, fully functioning, street-related structure. What once sustained street life is being replaced by inert material.

Collectively, these “dead” buildings offer a streetscape diorama. They show well on Google Street View but have little capacity to generate the social interaction of street life when the only access is through the mall. Like a diorama, they require suspension of disbelief.

Is it worth keeping these buildings? Yes, of course, but do we have to kill, stuff and mount them for them to survive? They are more than historical artifacts, bricks-and-mortar facades with finely detailed sills and cornices. They are part of an economic, social and cultural ecology that cannot be disassembled.

If we want to keep and recycle Yonge Street as part of the city we want (as I think we should), we need to consider the whole thing as a dynamic, evolving cultural landscape.

As a community, we have to be clear that if we want to keep the downtown stretch of Yonge Street and a host of neighbourhood main streets, we must establish planning, heritage protection and taxation policies to fit those intentions.

Just as it really gets going, I’m already sick of urban taxidermy.

Robert Allsopp is a landscape architect, planner and architect and partner in DTAH. This article was part of a Architectural Conservancy Ontario forum called Is This The City We Want?