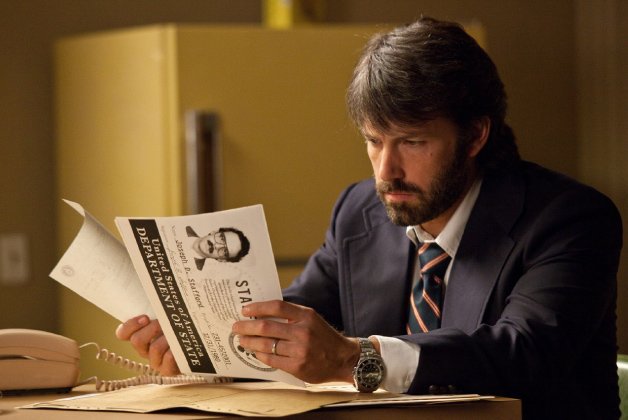 At the height of the Iranian hostage crisis in 1979-80, CIA “exfiltration” expert Tony Mendez – posing as a Canadian producer scouting locations for a Star Wars knockoff called Argo – went to Tehran to rescue six American diplomats hiding out at the Canadian embassy.

Directing and starring as Mendez, Ben Affleck spins the absurd true story into an engrossing espionage thriller that would be utterly ridiculous if the stakes weren’t literally life-or-death. The characters are drawn crisply and without affectation (Affleck lets the terrible 70s hair and wardrobe do most of the work), and I’d put money on the director’s having done at least a couple of passes on Chris Terrio’s script, which now sports the same mordant dialogue and fondness for dramatic contrast as Gone Baby Gone and The Town.

Argo gets great mileage out of every scene in which the super-serious Washington players (among them Bryan Cranston, Zeljko Ivanek and Titus Welliver) bristle at the bullshit posturing of the Hollywood types (John Goodman, Alan Arkin) they’ve enlisted to give Mendez’s project credibility.