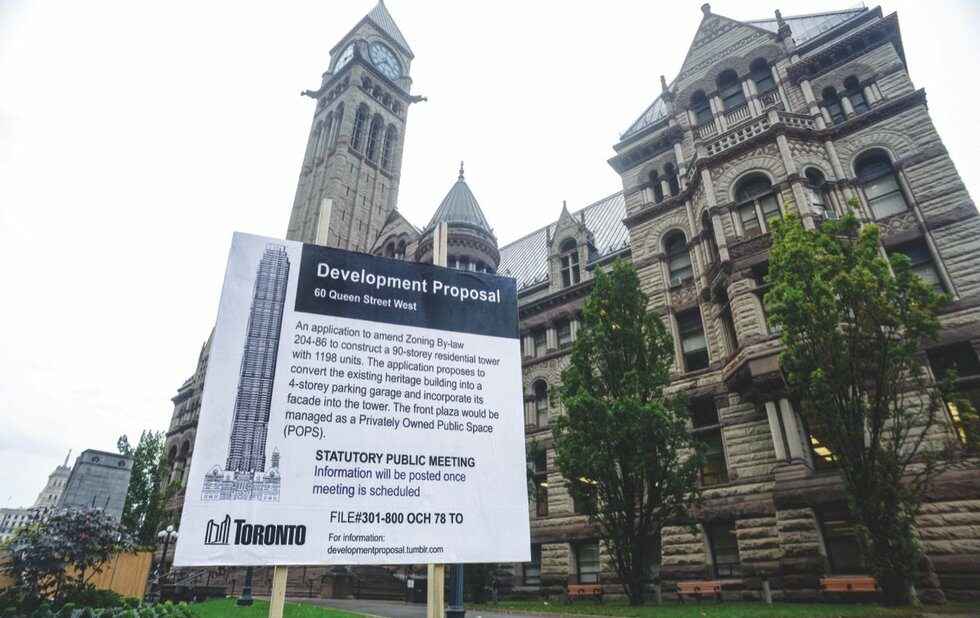 Fake proposal for 90-storey condo at Old City Hall is only slightly less preposterous than real one a year ago to turn the heritage landmark into retail space.

They call themselves Glo’erm and Tuggy, and last week the “urban interventionists” (aka Daniel Rotsztain and Mike Stulberg) provoked a timely discussion about the state of the city by erecting a fake development proposal sign outside Old City Hall announcing plans to convert the historic building into a 90-storey condo. Not everyone got that it was a parody. Rotsztain says buildings going up as part of intensification reflect developers’ vision of the city more than anyone else’s.

What triggered the idea to shame runaway development in Toronto?

It was inspired by the profusion of existing development proposal signs downtown. The black-and-white signs have been updated, but even the new ones seem to announce what will be happening on a particular site rather than offering an invitation for a conversation about the future of the city. Some of the real development proposals out there already look like parodies, with giant glass towers rocketing out of tiny heritage buildings.

Your fake proposal to turn Old City Hall into a giant condo is only slightly less preposterous than an idea floated a year ago to turn it into retail space.

Yes, the development proposal sign we put in front of Old City Hall was so mundane that most people didn’t notice it at all. And of those who did, many thought it was real, even when they read that the heritage building was going to be turned into a parking garage. And there’s the problem: the bureaucratic language and the lack of engagement with these signs numb the mind to the point that ridiculous claims can be slipped under our noses. This [art] project hit a nerve because it reflected the helplessness many of us are feeling toward the shaping of our city.

You argue that so much of the current development process “disrespects the city.” Them’s fightin’ words.

It would be impossible to watch the kind of developments going up in the last 10 years without having some kind of reaction. Even the chief planner, Jennifer Keesmaat, has called for a pause on development on Yonge between Dundas and Bloor. All those residential towers have contributed very little. There have been almost no units of affordable housing. There has been no increase in transit. No improvement to the public realm. Developers are maximizing units and storeys because they can.

One of the key issues causing unbalanced density is the protection of “neighbourhoods” in Toronto’s Official Plan – those areas with single-family homes that make up a majority of Toronto.

More people are moving here, and they have to go somewhere. But by rejecting density in these neighbourhoods, we’re concentrating it elsewhere. When we address that issue, more humane, mid-rise housing will have the opportunity to spread throughout the city.

But until then, we have a process that concentrates hyper-density in specific parts of the city. These developments become the bad examples that fuel the fire of those who reject development outright in single-family-home neighbourhoods.

Is it really fair to say that condo development has not been accompanied by public amenities? We do have Section 37 rules around that.

Section 37 sounds good in theory, and it has contributed things like streetscaping and community space. But we still have overcrowded and narrow sidewalks, an affordable housing crisis and overburdened transit. Section 37 can’t address all that. It might even be partially causing it: the city has become dependent on Section 37 funds as the only source of cash for community services in a time of government austerity. Much of the city is “underzoned” so that developers have to hand out Section 37 money in areas that obviously can and should handle more density. Because of this, Toronto’s zoning is frozen in time and doesn’t reflect where density should be going today.

One or two councillors have shown support on social media for your intervention. What’s the reaction been from city’s planning department?

So far, there’s been no official blowback. Heck, the fake sign was left on Old City Hall’s lawn for three days before someone took it down! I think the project spoke to many people’s concerns, inside and outside the planning department, that the development proposal process is not building a city that has a healthy relationship between density and services. It’s a conversation that needs to continue as Toronto grows.

Where did the names Glo’erm and Tuggy come from and what do they mean?