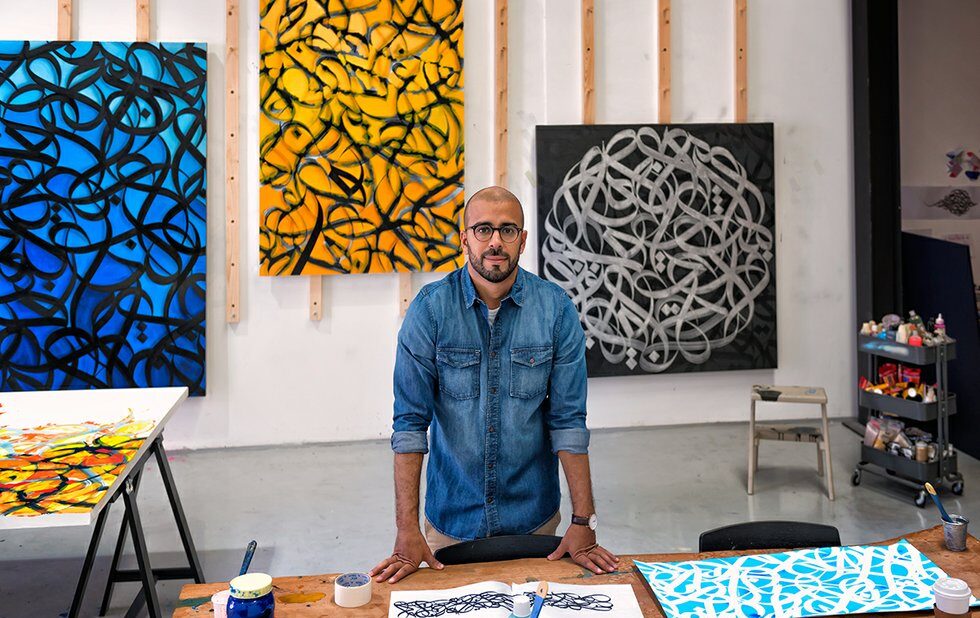 In a world of increasing division, artist eL Seed presents a rare opportunity to bring people together. A French artist of Tunisian descent, he blends Arabic calligraphy and graffiti (in a style dubbed ‘calligraffiti’), creating mesmerizing large scale public murals that transcend borders, language and culture. And in a one-day exclusive engagement, he will bring his global insight to the Aga Khan Museum and share his experiences of using art to bridge perceived divides.

Founded in September 2014, the Aga Khan Museum is on a mission to close the gaps that separate people. The first museum dedicated to the art of Islamic Civilizations in North America, it connects cultures through art and promotes pluralism and respect for diversity. Through its exhibitions, performing arts, public programs and lectures, it’s tasked with highlighting the positive contributions of the Islamic world to our common humanity.

“We’re really excited to welcome eL Seed to be our 4th Annual Lecture speaker and share his global perspective with us. With all of our events, we’re looking to how we can be a forum for conversation and how we can challenge people’s thinking through art,” says Jovanna Scorsone, the Museum’s Education and Public Engagement Manager. And through these events, she says that participants often discover that they’re more connected than they might realize.

In many ways, eL Seed’s art is the perfect reflection of the Museum: traditional and transcendent, contemporary and cultured. He creates beautiful and vibrant lattice works, intertwining messages written in Arabic with mesmerizing twists and turns of graffiti. In Rio de Janeiro, he translated a Brazilian poem and converted it into Arabic script in South Africa, he transformed a Nelson Mandela quote into a public display of unity.

“I think that Arabic script touches your soul before it reaches your eyes,” he told an audience during a 2015 Ted Talk. “There is a beauty that you don’t need to translate.”

In short, eL Seed’s art does not just hang on a wall: it becomes a part of whatever space it occupies and challenges participants to look within.

Among his many accomplishments, he was awarded the UNESCO-Sharjah Prize for Arab Culture in 2017, was named a Global Thinker in 2016 by Foreign Policy and in 2013 collaborated with Louis Vuitton on their famous ‘Foulard d’Artiste.’ And this month, he will be speaking as part of the Aga Khan Museum’s Annual Lecture series, which has brought luminaries from all over the world. Among them are renowned Turkish author Orhan Pamuk, Minister of Syrian Antiquities Maamoun Abdulkarim and religious historian and author Karen Armstrong.

While the Annual Lecture is a highlight of their programming year, the Museum is a living institution with year-round events that bring life and unexpected moments of inspiration into spaces often typified as static. This fall, for instance, the Museum will welcome Zarqa Nawaz, creator of Little Mosque on the Prairie and author of Laughing all the Way to the Mosque as she discusses her experience as a Canadian Muslim woman and how that has informed her career creating mainstream media.

The Museum’s upcoming performing arts season, The Other Side of Fear, features the Canadian debut of acclaimed British-Bahraini trumpeter and composer Yazz Ahmed. In addition to working with Radiohead (The King of Limbs) and others, she’s released two celebrated albums of psychedelic Arabic jazz, most recently, La Saboteuse (2017), which garnered four-star reviews (out of five) from All About Jazz and the Guardian.

It’s this blending of relevance and reverence that sets the Museum apart from any other space in the city. And all of these events comes together as part of its continued core commitment to education, which reaches beyond medium, age and background.

“Part of what we do is recognizing that art is more than physical objects,” says Scorsone. “It comes back to the people, the stories they tell and the cultures they share.”

Said another way, the Museum is a place to discover unknown inspiration, interact with the unexpected and bask in big ideas.

How Can Art Bring People Together with eL Seed will take place Wednesday, September 26th at 6:30 pm. Tickets and additional information can be found on the Aga Khan Museum’s website.