Depending on where you stand on the debate over whether cities should retain or remove contentious public monuments, the sight of a King Edward VII statue floating down the Don River might strike you as either celebratory or controversial.

For Amy Lam and Jon McCurley of artist duo Life of a Craphead, the matter-of-factly titled performance art piece King Edward VII Equestrian Statue Floating Down The Don is meant to inspire questions.

“The project took on greater resonance when Charlottesville happened,” says Lam, referring to the Unite The Right rally in Virginia in August that left 19 injured and one dead. The violence erupted over the removal of a statue of Confederate soldier Robert E. Lee.

“Because of those events, a lot of questions we’re getting surround the conversation over the removal of statues,” adds Lam, noting that the performance isn’t just about the public monuments debate but highlights the hidden history of the Don. “There will be staff around the trail providing context, but I think even people who don’t have an idea of the stories and history can discover it for themselves.”

Over three more Sundays, Life of a Craphead will send a life-size Styrofoam-and-wood replica of the king down the lower section of the Don between Riverdale Park and the Queen Street bridge. (The first performance was on October 29 and continues November 5, 12 and 19 from 1 to 4 pm.)

King Edward VII Equestrian can be read as both political and ecological. Lam and McCurley conducted research into the river’s history, leading them to an anecdote that connects royalty and toxicity.

In 1958, Princess Margaret was scheduled to stop at nearby Riverdale Farm during her visit to Toronto. In anticipation, city officials dumped gallons of perfume into the Don in an attempt to mask the smell of the polluted river.

“We kept coming back to that story because it encapsulated the idea of how much human intervention impacts the history of the Don,” says Lam, who points to the straightening of the river’s natural course, first, to accommodate a Canadian Pacific Railway corridor and, later, to accommodate the Don Valley Parkway.

The idea of human intervention on the landscape also drove Lam and McCurley to think about the forces of colonialism as symbolized by King Edward’s statue. 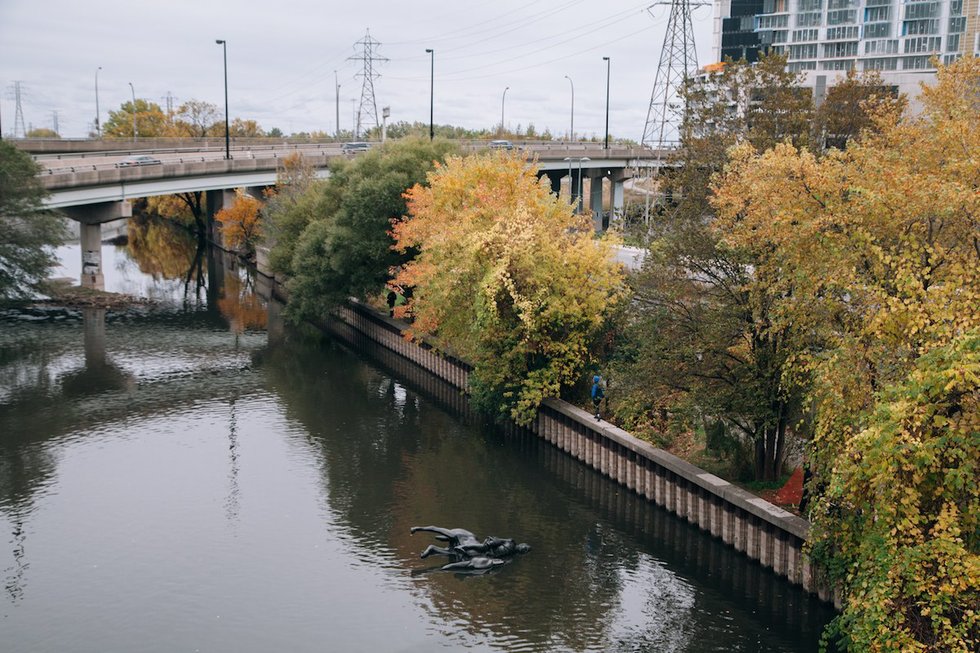 In 1922, the original 15-foot bronze sculpture was erected in India to commemorate the British monarch’s reign as emperor. Following India’s independence in 1947, the statue was removed and placed in storage.

It arrived at its current home in Queen’s Park in 1969 amid public protest after a prominent Toronto art collector decided the city needed a “nice” equestrian statue.

“This is a statue the Indians didn’t want any more,” says Lam. “There’s something contradictory about our project because when we dump the statue in the river, it’s not just going to disappear. We’re going to retrieve it and put it back in again.”

“I would like the project to bring together immigrant communities that have experienced colonialism overseas and Indigenous people who experience colonialism here because we’re on their land,” says Lam.

“It’s important for Canadians to have a sense of these unique histories and the different forces that have caused people to immigrate here.”

Happening in Toronto: An open conversation about Black motherhood