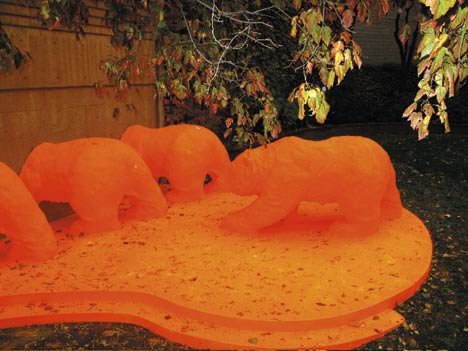 Be prepared to be dwarfed by Dean Drevers Toronto Sculpture Garden installation.

From deer grazing at Bay and Dundas to coyotes roaming the Beach, it’s been a bumper year for urban wildlife sightings. And in his outdoor art installation Bear Hunt, Toronto artist Dean Drever brings another species into the mix: neon-orange grizzlies.

Viewed from the streetcar during our grey, sans-snow December, Drever’s renderings of this regal animal initially seemed a bit shabby.

In particular, his plywood platform showed wear and tear – not ideal for an ultra-pop colour scheme or a long-term install.

Fortunately, coming face-to-face with Drever’s sculptures increases their impressiveness level. Up close, I marvelled at the size of these creatures in relation to my puny human bod. Yes, Drever seems to have scaled them up a bit, but the incredible fearsome power of the animals is still well evoked.

At the same time, a strong sense of displacement comes across. Grizzlies are a western animal living mainly in Alberta, BC and the Yukon. What does it mean to come across one – or intentionally plant one – here in an eastern megalopolis? In Banff, this installation would go over with nary a question mark – or, at the outside, it’d be taken as a statement on tourist kitsch. But in Toronto it conjures different looks and different linkages. Drever himself is from Edmonton and is a member of the Haida nation.

He has a long record of creating bear sculptures, and a text on site explains that he’s interested in what bears represent in terms of power, violence and anger. Though more effort is needed to sharpen that point visually – it would’ve been nice to see more than one pose used here, for instance – it’ll be interesting to see how Drever’s urban menagerie grows in the future.