"We have a much longer shared history than we have of one that has any element of tension in it – shared languages, practices, geography. So in the current political climate, there's much more to gain from collaboration," says scholar Shari Golberg. 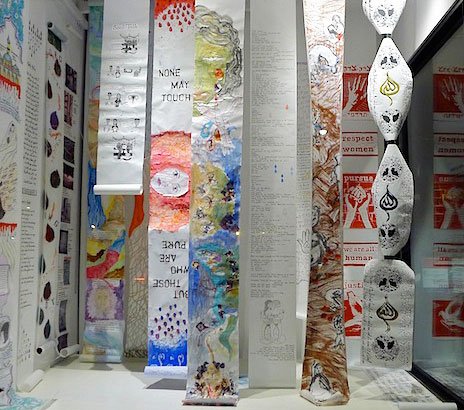 BLOOD, MILK & TEARS at Fentster @ Makom (402 College), to May 24. Fentster.org. On Wednesday (March 8) at 7 pm, musician Aviva Chernick and poet Sheniz Janmohamed perform at Makom. On April 30, 7 pm, filmmakers Zarqa Nawaz and Francine Zuckerman discuss their documentaries Me & The Mosque and Half The Kingdom. At the Noor Cultural Centre (123 Wynford). See listing.

At Fentster, the window art space of a storefront Jewish centre, we get a precious glimpse of a way forward: a collaborative installation of drawings, paintings, photographs and writing on hanging paper scrolls by Jewish and Muslim women.

Blood, Milk & Tears grew out of a course of the same name that scholar Shari Golberg led last year (part of her Shema & Iqra’: The Jewish Muslim Text Project), in which women of both faiths discussed religious texts on subjects like menstruation, marriage and access to sacred spaces. Each session ended with a guest artist’s presentation.

Golberg, who’s been working with Muslim and Jewish women since 2004, says, “In 2014, I started to realize that some of the challenges women have in their traditions are similarly shared by artists. Both traditions at different points have had a challenging relationship with visual imagery.”

When the course ended, the women were keen to continue meeting, and Fentster curator Evelyn Tauben proposed they make an installation for the window. The Makom storefront had once been the studio of artist Rochelle Rubinstein, who led the art workshops and supplied the idea of scrolls.

“The scroll is symbolic in Jewish tradition, but there are references to it in the Qur’an,” says Tauben. “It was a shared creation process. Working side by side was important, and unexpected moments came from being in the same space together.”

Not all the women are professional artists. Siham Chowdhury collaborated with Sharon Ross on a scroll about breastfeeding.

“I worked primarily as a dancer before having my daughter three years ago. This is the first time I’ve submitted a drawing as an adult. It’s added another dimension to my artistic life. What a gift!”

Ross, a dentist and mother who writes and does photography, contributed the poem that accompanies Chowdhury’s drawing.

“At the class on breastfeeding, I said, ‘Sorry I’m late – I was breastfeeding,'” says Ross. “I’d been shipping breast milk to a friend in Montreal, and Siham had gotten breast milk from her friend for her baby, so we bonded over that.”

“We’re taking on taboo subjects in difficult areas,” adds Tauben. “I think there was some shame for some women, or hesitation about crossing that boundary from private to public. This isn’t just an exhibition – it’s a very public outlet on the street. We really encouraged women who were inclined to remove themselves from the process to stick with it.”

The artists were still at work when the shooting at the Quebec City mosque happened, and the group wrote a letter and sent donations to the Quebec congregation.

Tauben and others from the group went to the Friday service at the Noor Cultural Centre the week of the attack, she says, “to show that we’re not just hosting an event in their space but we want to stand with them. We’ve seen what that looks like in the U.S. this week in the other direction, when there’ve been desecrations of Jewish cemeteries and Muslims have stepped up in support.”

The Noor Centre was an eye-opener for Tauben. “It’s run by women and seems quite egalitarian. The regular participants of that community are already so immersed in interfaith work that I feel we have a way to go [to catch up with them] in the Jewish community.”

Golberg is heartened that larger organizations are taking on the interfaith work she’s pioneered. “We have a much longer shared history than we have of one that has any element of tension in it – shared languages, practices, geography. So in the current political climate, there’s much more to gain from collaboration.”

As Ross concludes, “There’s a lot of beauty coming from dark times.”