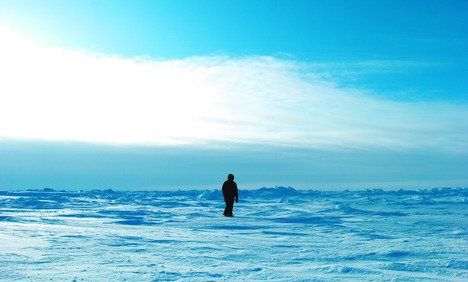 Guido van der Werve turns against the earths movements in The Day I Didnt Turn With The World.

A good nickname for Dutch artist Guido van der Werve might be A Beautiful Mind. Barring that, you could brand him a more cosmic Vito Acconci or a more existential, math-nerdy Buster Keaton.

The main work here is a 40-minute film called Nummer Nacht. The first part does a slow pan of a room of chess players. The second shows a man scrambling over beautiful yet desolate landscapes at Mount St. Helens. The third starts with an interior shot, pulling out to survey the San Andreas Fault. One chess game started in the first part continues throughout.

Though the length and slow pace of Nummer Nacht test viewer patience, the film also challenges in enjoyable ways. The classical score, composed by the artist, is romantic and touching. And the data provided – about the number of stars in the universe or number of possible chess games – boggles the mind. If it takes thousands of years to fully explore chess, a relatively intelligible game, how can we ever grasp the complex back-and-forth of the universe?

In Nummer Negen: The Day I Didn’t Turn With The World, human and cosmic time scales are more cleanly juxtaposed, to striking effect. This film speeds up 24 hours as van der Werve stands at the North Pole, slowly turning clockwise as the world turns counterclockwise. The premise is as bare as a high-school physics test problem, but the sun and clouds morphing over the scene add a dimension of wonder.

The earliest work here, Nummer Acht: Everything Is Going To Be Alright, is thinner than the others but the most eye-catching. The artist walks a few steps ahead of an icebreaking ship. Individual fragility again contrasts with a massive, seemingly unstoppable (and actually kinda doom-filled) force.

Even though van der Werve can be cerebral, there’s a lot for the heart here, too.