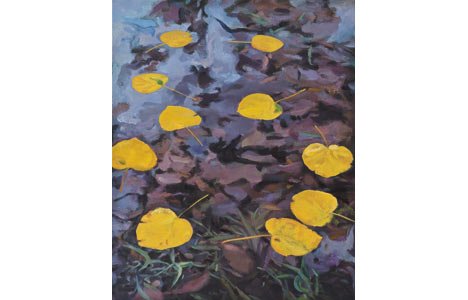 MOCCA’s Will Gorlitz retrospective had me feeling nostalgic for the 90s, an era he helped define.

He’s the epitome of the era’s theoretical preoccupation with the real and the represented. Each painting taunts us with the possibility that the mysterious relationship between the object and its image might be suddenly clarified.

Then again, we can be glad they don’t. Gorlitz’s prodigious output over the last 20 years dives into the paradoxes within painting, producing a body of work that is both coolly incisive and wryly humorous.

Floating leaves on a pond turn out, after closer scrutiny, to be configured as numbers. He paints topographic globes as if they were the Earth shot from low-flying orbit, each country and feature neatly labelled against the inky blackness of space.

Pairs of askew canvases depict highways that are perfectly straight. He shows his disenchantment in his shattered flower vases painted in the unmistakable hues of enlarged Polaroids. They read like stark refusals of representational tropes.

His Three Essays On The Theory Of Sexuality has a cerebral cheekiness that had me chuckling. It’s a neat grid of paintings in which common objects and fruit are painted atop every page of Freud’s landmark essay. A belt lies coiled suggestively atop the page entitled The Sexual Aberrations, and a metal number 9 (or is it a 6?) lies at the top of the page on bisexuality or “sexual inversion.”

Gorlitz’s most recent work, Always Already, expands the alienation theme with a series of eerie plastic zoo animals adrift in white blizzards. Though this series is read by some as an environmental elegy, it looks more to me like nostalgia for meaning. His marooned toy animals come across as floating signifiers, displaced and looking for shelter.