Kent Monkman prepares to debut his largest painting yet

On the heels of his popular U of T Art Museum show, the Cree artist is unveiling a 12 x 24-ft history painting based on a treaty between the Dutch and the Iroquois 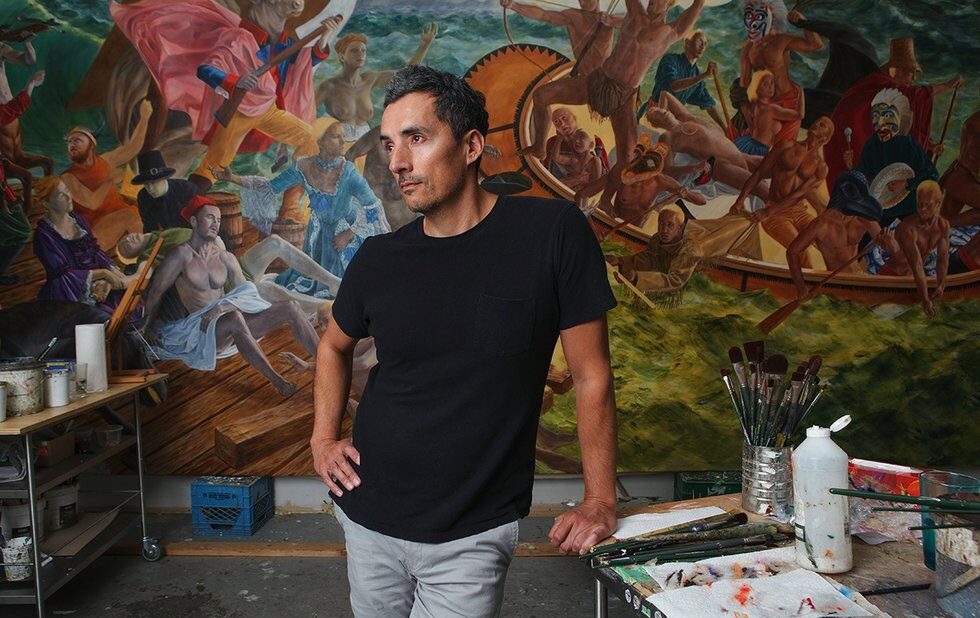 Kent Monkman’s show at U of T Art Museum earlier this year might have been Toronto’s most important art exhibition of 2017.

Hugely popular, Shame And Prejudice: A Story Of Resilience presented the artists’ work along with a selection of historical paintings and artefacts. A much-needed corrective to the Canada 150 celebrations, the exhibition addressed topics including treaty signings, First Nations’ reserves, residential schools and missing and murdered Indigenous women. Whatever the event’s organizers had in mind when planning the sesquicentennial, it probably wasn’t this.

Now Monkman is back with Two Ships. The monumental painting will be presented for two days – September 26 and 27 – as part of 360: Bridges at 6 Degrees Citizen Space, an event that asks what citizenship looks like in the 21st century. This series of discussions at the Art Gallery of Ontario will be livestreamed via four Toronto Public Library branches. Monkman’s talk happens September 26 from 3:30-5 pm, and his piece will be shown in Paris at the Canadian Cultural Centre’s inaugural exhibition in May 2018.

This project has been ongoing for almost three years. I wanted to do a very large history painting. The scale has a certain impact. The story I wanted to tell is based on a treaty between the Dutch and the Iroquois called the Two Row Wampum Treaty. It was a belt with two purple rows of beads made by the Iroquois to talk about a peace alliance — one for the European vessel and one for the Indigenous vessel and the idea was that they would travel a parallel course and not interfere with one another.

This painting is, of course, that moment of interference. I was inspired by Delacroix’s Christ On The Sea Of Galilee (1854). The parable here was that Christ was asleep and everyone was freaking out because they thought the boat they were in was going to sink. And he was blissfully asleep. In my painting, because of the collision of two cultures, these two vessels are about to collide and Miss Chief, my alter ego, is asleep in the boat. The idea is she is going to wake up and calm the storm.

With your show at U of T’s Art Museum – the room about the residential schools, for instance – I saw that and thought, I’ve never seen anything like this before.

Well, that was part of my work as I cycle through Western art history looking for all these gaps – there are huge gaps in the narrative and how the story of North America is told through a very European lens. The other stuff never really made it into the art canon because no one wanted to show it or to expose it. These chapters of Indigenous history – the removal of children, the rate of incarceration, the dispossession of Indigenous people from our land – those never made it into art history. They never made it into our school curriculums. I never set out to be an educator, but when I went into art history, all this stuff just came to the surface and I had to deal with it.

A large part of what I do in the art world is bring people over to my perspective because they are so used to the dominant narrative, which is a whitewash. The incidences where this story does exist in art history is minor. The story North America tells itself about its own history and mythology is flawed.

Do you think there are different rates of progress between Canada and the U.S. on these issues?

[Americans] are at least a generation behind in terms of their awareness. It’s like slipping back in time when you go across the border, depending where you are. That’s my perception. I feel that they are 20, 25 years behind. They have never had a major biennial, like the Sakahàn, of Indigenous work. They don’t have Indigenous curators working in institutions as contemporary curators. We do. And those are major battles that took generations to secure.

There is the National Museum of the American Indian in Washington, D.C., but that’s an ethnographic museum.

Exactly. That’s still how native people exist in the minds and imaginations of Americans, that they belong in the ethnological wing. Or the Indian Market. It’s either tourist art or they are ethnological specimens. That’s one of the biggest problems holding back Indigenous art from getting into the mainstream.

In Canada, the treaties haven’t been resolved. Is that the reason this history is not being dealt with?

This is why Indigenous people fill our prisons, because they were foster children. They were taken out with the Sixties Scoop and never had a chance. They never had a relationship with their parents or grandparents and they became institutionalized. They are in our prisons, they are in our foster care system. I could go on and on.