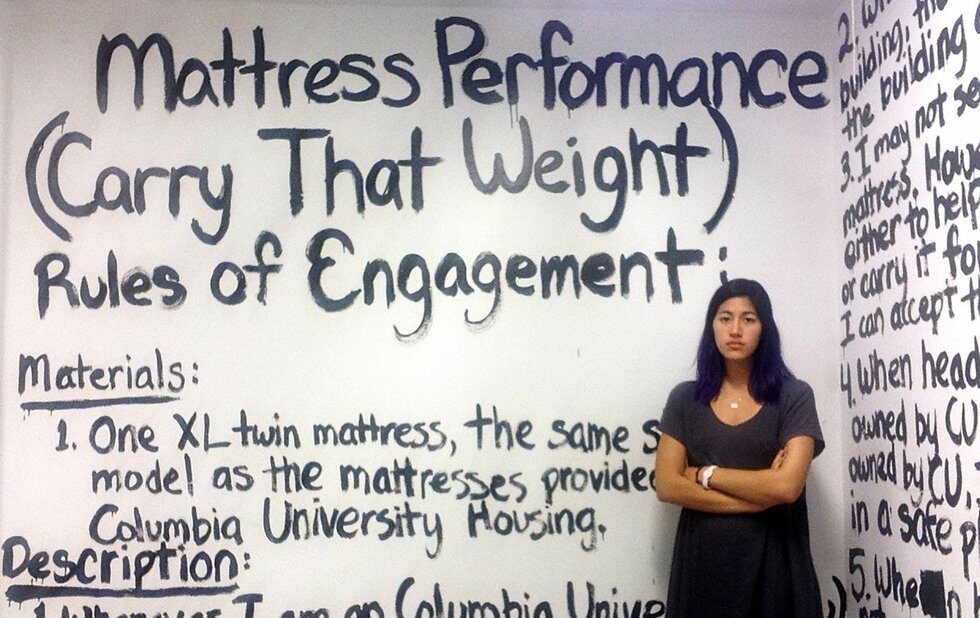 Artist Emma Sulkowicz stands with the rules of engagement she created for Mattress Performance (Carry That Weight).

Emma Sulkowicz doesn’t have much to say about President Donald Trump, but the artist is noticeably agitated when I mention his name. As an American, an artist, a racialized woman (she’s Chinese, Japanese and Jewish) and a rape survivor, you’d think that 24-year-old Sulkowicz wouldn’t be able to hold back. But she takes a deep breath and says plainly, “I believe one of the reasons he got elected is because he got so much free advertising.

“When artists respond by saying, ‘Now more than ever we have to make art about Donald Trump,’ I don’t agree because you’re giving him the exact kind of free publicity that allowed him to slip into office.”

Hours later, Sulkowicz posts a photo to Instagram from the bathtub of her Toronto hotel. “I think Canadians are cooler than Americans,” she writes in the caption.

As part of International Women’s Day, Sulkowicz travelled from her home in New York City to Ottawa and then Toronto to speak at Carlton and Ryerson universities last week. She’s often asked to talk about sexual violence, art and activism on college campuses – she’s become the poster girl for that combination of topics.

In 2012, during her second year at Columbia University, Sulkowicz was raped by another student in her dorm room (she filed a complaint against the university and the accused, but a district attorney did not pursue charges). For her senior thesis during the final year of her visual arts degree, Sulkowicz created Mattress Performance (Carry That Weight), an endurance performance art piece that required her to carry a twin-size mattress – the same type of mattress she was raped on – around campus so long as the accused attended the school.

Sulkowicz gained worldwide attention for the piece, which started September 2014 and ended in May 2015 (where she ultimately carried the mattress across the stage at her graduation ceremony). She says members of the public would come up to her and divulge their own stories of surviving sexual violence. People touched her as if she were a saint that could heal. But the unexpected transformation of Sulkowicz to celebrity also came with its threats.

“Everyone was suddenly an expert on my rape and whether I was a real rape victim,” she recalls.

Critical response to Mattress Performance included praise from the New York Times and performance artist Marina Abramović. Social critic Camille Paglia attacked the piece as “a parody of the worst aspects of grievance-oriented feminism.” Sulkowicz appeared in the Oscar-nominated documentary The Hunting Ground. 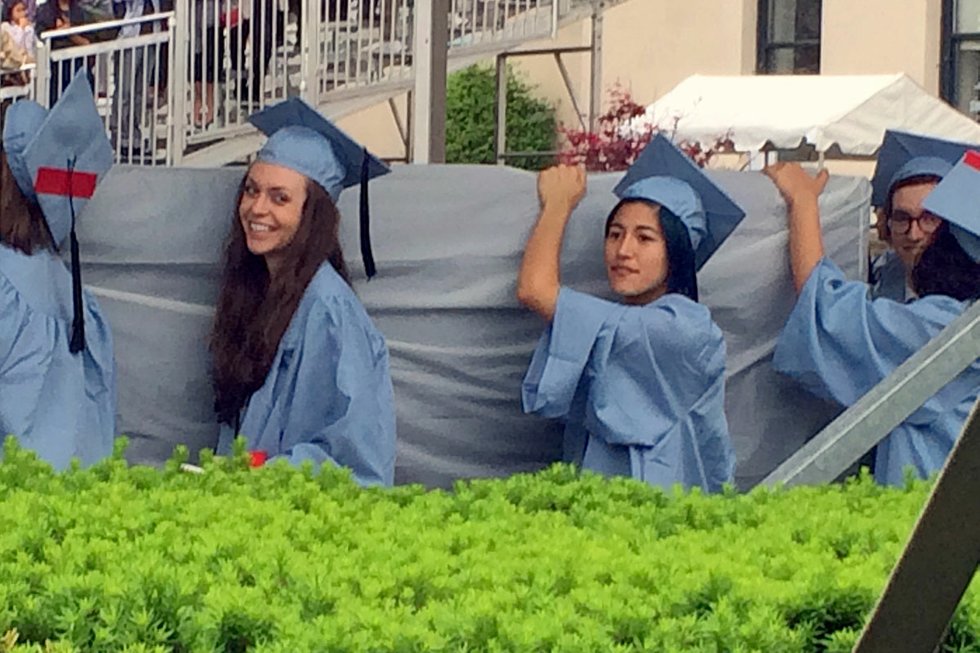 Emma Sulkowicz (centre right) carries a mattress across the stage with the help of Columbia University students on graduation day.

Since graduation, Sulkowicz has been prolific, continuing to create art pieces centered around her experience as a rape survivor. Oddly, she doesn’t do it because she finds it cathartic, but because it’s somewhat triggering and retraumatizing. It’s part of what Sulkowicz considers a “productive” definition of healing that requires one to “feel more.” The daughter of two psychiatrists, Sulkowicz knows an impressive amount of critical and philosophical theory, citing the likes of Freud and Foucault as effortlessly as most people her age know the names of Kardashians.

“I talk about it as radical feeling,” she explains. “Rather than repressing my emotions, I’m interested in feeling them way more and all the time, because I think that’s what makes good art.”

Those feelings led Sulkowicz to create Ceci N’est Pas Un Viol, which translates to “This is not a rape,” during summer 2015. In the eight-minute video, Sulkowicz has sex with an anonymous actor, reenacting her rape in a Columbia dorm room.

In 2016, Sulkowicz performed Self-Portrait (Performance With Object) at a Los Angeles gallery. She created a robot version of herself named Emmatron, which was programed to respond to a set of questions. As she stood next to the robot at the gallery, fielding questions from the public, she would direct people to Emmatron to answer the questions she didn’t want to.

Sulkowicz says her art pieces often start as an image in her head. Mattress Performance was conceived as a vision of Sulkowicz carrying a mattress around Columbia.

“I asked myself, ‘What does that mean? Maybe it’s a performance art piece, and if it is, then what are the rules?’ I chip away at it from there,” she says.

Her most recent work, The Healing Touch Integral Wellness Center, which ran at Philadelphia Contemporary, saw Sulkowicz in the role of a doctor performing mainly talk therapy to volunteer “patients” in a parafictional medical clinic. At the same time, Sulkowicz is a scholar in the year-long independent study program at New York’s Whitney Museum of American Art. Her speaking engagements on college campuses help earn her an income.

No matter what art pieces Sulkowicz creates next, she doesn’t expect to ever disassociate herself from her identity as a rape survivor or “mattress girl” – nor does she necessarily want to. Sulkowicz goes so far as to say that without violence, art might potentially not even exist. If she stifles her feelings of anger, sadness and distress, she worries her art might become boring.

“If I make art based on the constant expression of very crazy emotions, then I think my art will continue to be important and interesting,” she says. “I live a really weird life. I’m just trying to figure out what it means.”