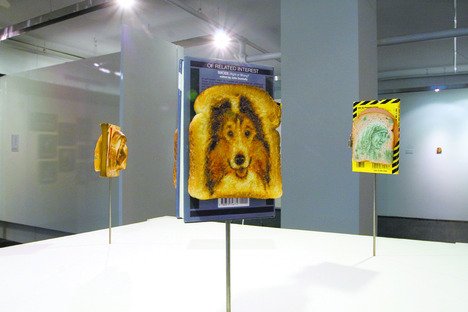 From Mona Lisa to Cindy Sherman, portraits provide some of our best-known works of art.

Unfortunately, the first two times I went to see the show, it was closed – for a photo shoot, then for a wall repair. Bad luck? Perhaps, but it’s the kind of thing that most viewers wouldn’t, quite rightly, put up with. That said, once you actually get in to see it, Sitting Pretty ain’t all that bad.

Tibi Tibi Neuspiel’s Book Sandwiches are a highlight. Neuspiel’s earlier beeswax sculptures of famous faces on toast – some of which are on display here, too – often seem too simple and one-linerish. But these newer works are much stronger and more complex.

In one, a miniaturized Jack Kevorkian book and a condom wrapper are sandwiched between slices of Lassie and Garfield. In another, a locked Cliffs Notes of The Diary Of Anne Frank is mashed between “mouldy” slices of Hitler and Mother Teresa. All evoke the wide range of ideas, faces and histories that are ingested as part of contemporary life. (It’s also easier to see Neuspiel’s technical virtuosity in these newer works.)

Stephen Appleby-Barr’s Nortammag Archives paintings and Paul Butler’s Toronto Now Suite have already been shown around town. Each is reasonably successful in its own way, but taken together, Appleby-Barr’s tribute to a scene seems cancelled out by Butler’s critique of same.

Finally, a portrait of Vancouver’s Collecting Collective, an artist group that also practices – and here, poses – as collectors, falls a bit flat, even if the group’s longer-term activities seem compelling.

In the end, I guess a single picture can only tell so much.