Part of a global initiative, Books on the Transit wants to bring strangers together through a shared love of reading – but the TTC is not having it 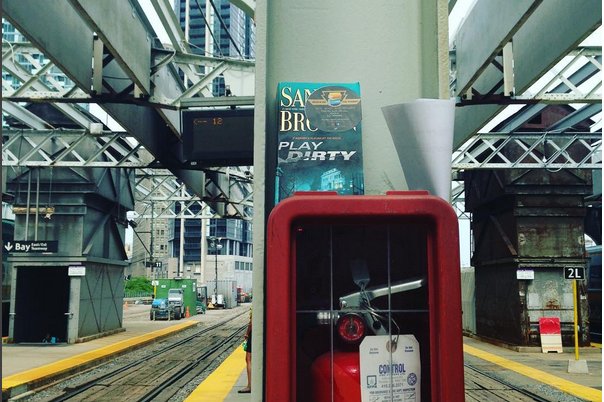 When a GO commuter found a copy of John Irving’s A Prayer For Owen Meany on the bus, he contacted Books on the Transit co-founders Danielle Sanders and Kristyn Little, telling them he found their lost book and asking how to return it.

They told him to keep it, read it and place it back where he found it.

Since March of this year, Toronto has had its own version of the global book sharing initiative, Books on the Move. Founded in 2012 in London, the movement received buzz in 2016 when actress Emma Watson was spotted hiding copies of Maya Angelou’s Mom & Me & Mom around the London Underground. Today, there are more than 20 branches across 14 countries.

An avowed bibliophile, who counts a signed copy of Nora Ephron’s When Harry Met Sally screenplay as a prized possession, Little was fascinated by the initiative’s ability to bring strangers together through books.

“I’m one of those incredibly nosy people who will see someone reading on their commute, and I’ll ask them what they’re reading,” she says. “There’s so many different ways you can engage with a book and we feel that this is a way to engage with the community.”

Every day, Sanders, Little and their volunteer Book Bandits hide at least one book a day on GO buses, trains or the Union Pearson Express. The Bandits are a Canadian spin on Book Fairies, the global name for Books on the Move’s roving book droppers.

Essentially, Books on the Transit becomes part of a publisher’s marketing plan: books are donated in return for the social media reach and recognizability of the Books on the Move platform, which encourages commuters to take a photo, post and tag books once they’ve found them.

Alongside classics and current titles from traditional publishers, Books on the Transit is open to working with self-published authors. In that scenario, writers are asked to pay a nominal fee to cover the price of the stickers affixed to each book.

Little says she’s also looking to hook her first Author Bandit, a recognized writer who will drop their own book on transit. Little’s ultimate get would be famed Canadian novelist Margaret Atwood, who recently liked one of their comments on social media.

Ultimately, Little would like to see Books on the Transit reach the level of reader engagement enjoyed by New York’s Books on the Subway. With more than 33,000 followers on Instagram and its own Emma Watson cameo back in March, Books on the Subway has seen its share of commuters ravenously hunting down its books. After locating a copy of Claire McMillan’s The Necklace, one reader recently tweeted: “It took months of constant vigilance but I finally found one!”

A former corporate communications manager for the Toronto Public Library and the author of four books, Aikins was immediately intrigued by the idea of fostering a reading experience across GO’s network.

“We’re always looking for ways to ensure our customers are more comfortable,” says Aikins, adding that GO is underway on a year-long process to outfit its buses and trains with WiFi. “The actual tangible [feel of] books and newspapers in your hands, I don’t want us as a society to lose that love.”

While Books on the Transit is available on GO, the TTC has declined to participate. The city’s transit commission cited an unwillingness to keep track of the books if they’re turned in as lost articles.

“Our position on this is that we would prefer people, no matter how well-intentioned, not leave books laying around on TTC property,” spokesperson Stuart Green wrote in a statement to NOW. “There is the very real possibility they could get turned in as lost articles or simply discarded and we cannot take on the additional task of trying to keep tabs on these items.

“Toronto has one of the greatest public library systems in the world that people should be encouraged to use,” he added.

On occasion, Aikins has seen the initiative’s books turned into GO’s lost and found but she’s willing to work with Sanders and Little toward a solution to retrieve them.

She notes that Books on the Transit does not require any allocation of resources from participating transit systems and that her team can conduct weekly pickups of books turned in as lost.

“I want more of a valid reason, personally,” she says. “How is it that San Francisco, Los Angeles, Montreal, Delhi – all these other cities have been doing it for years, so why is the TTC not willing to participate? This is something that can help build its reputation – being a transit system that doesn’t have the greatest track record.”

However, Little is not giving up her quest to bring Books on the Move to the TTC.

In the meantime, GO commuters can keep track of where books are dropped at booksonthetransit.tumblr.com, on Instagram and on Twitter.