“It’s the butt of a lot of jokes,” says the Toronto author, “and a lot of that has to do with race. Scarborough’s got a rep for crime, but there’s nothing that happens here that doesn’t happen downtown.” 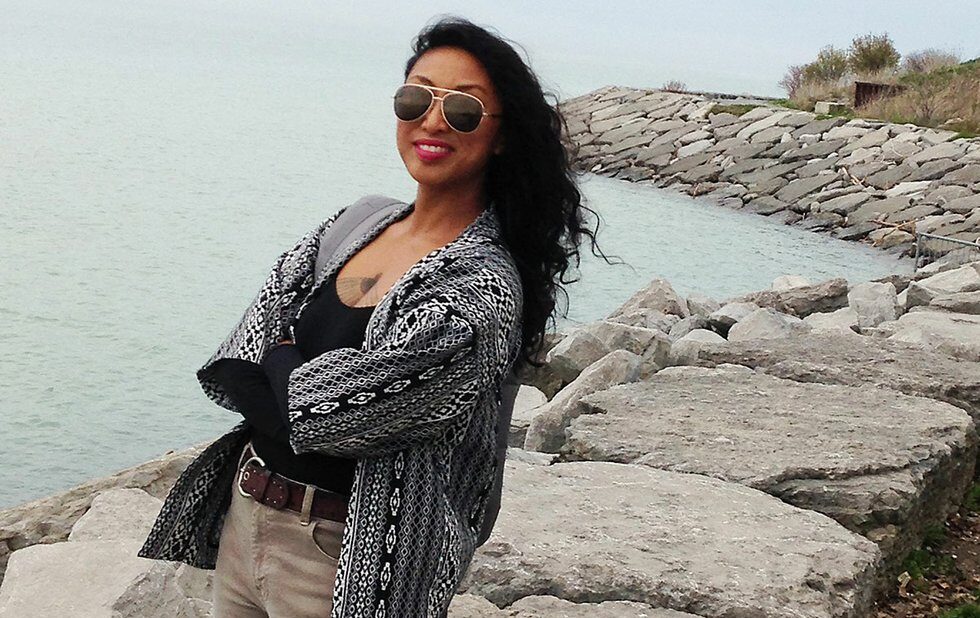 Catherine Hernandez is a queer creator – she appeared as a proud femme in NOW’s 2017 Love Your Body issue – and has written, among many works, the children’s book M Is For Mustache. She’s a playwright as well. But it was during one of her non-writing gigs, running a daycare out of her home, that she wrote her first book of adult fiction, Scarborough.

Anyone who’s been at home with a kid will wonder how.

“I’d wake up at 5:30 am, then start to write at 6 until parents dropped off their kids,” she says, laughing animatedly as she sits on bench beside a playground in Scarborough. “Then I’d write again when the kids napped. When my daughter went to sleep at about 9 pm I’d write more. I don’t know how to do it any other way. When I’m doing laundry, feeding a baby, changing diapers, I’m thinking, and then at night I just write and write and write.”

Hernandez is a proud ambassador for Scarborough, where she first moved when she was 10. She still calls the district home.

“It’s the butt of a lot of jokes,” she says, “and a lot of that has to do with race. Scarborough’s got a rep for crime, but there’s nothing that happens here that doesn’t happen downtown.”

Part Filipino, Chinese, Spanish and Indian, Hernandez is deeply attuned to the ways people in Scarborough deal with race as compared to denizens of the city core.

“People often ask me, ‘Why do the characters keep referring to each other as brown or white?’ The answer is that there’s an honesty about racism here that you don’t see downtown. Downtown it’s insidious. There’s a Canadian politeness that I don’t appreciate as a brown person. Diversity is a buzzword, but in my lifetime I haven’t seen progress in how people speak to me or pay me, so why lie about it?

“Here we’re clear. A typical phrase may be, ‘You know that rich white lady?’ Why not say it? ‘That’s a rich white lady who lives in a big-ass house by the lake.’

“Or here there’s a townhome complex called the Rez because Indigenous people live there. Someone might say calling it that is racist. It’s not – those are the people who live in that complex.”

We’ve just finished visiting Hernandez’s favourite Scarborough haunts: a spot by the lake where she writes, her favourite restaurant to buy patties. Along the way, she points out graffiti of a penis on the pathway.

“That image has been there for years. They keep trying to remove it, but whoever made it keeps creating it over and over again.”

We have our most focused conversation outside a literacy centre in the playground where she used to bring her daycare charges. It was here that she absorbed the experience of parents, kids and front-line workers that make up the heart Scarborough, the novel.

At one point she calls out to a kid running by with her gym class, “Hi, how’s your mom?”

“You won’t believe this,” she says excitedly, “but one of the characters is based loosely on her mother.”

Another character runs the centre and is in constant conflict with her bureaucrat boss.

“There are decisions made by people who are far away and don’t know the needs of the community, while front-line workers, who don’t have the power, do. That’s the case with Miss Hina, who’s forced to adjust.

“It was great to author someone who knows what her boundaries are, and I wanted to show a brown woman who’s sticking to her guns.”

Hernandez is aware of the perils of writing a book with a place name as its title, suggesting she’s distilling the experience of an entire suburb, but she doesn’t worry too much about that.

“I knew that there were going to be people who would think, ‘Who the fuck does this author think she is writing about a part of Toronto nobody gives a shit about?’ All the more reason to write it. If I’m not shit-disturbing, what’s the fucking point in writing?”