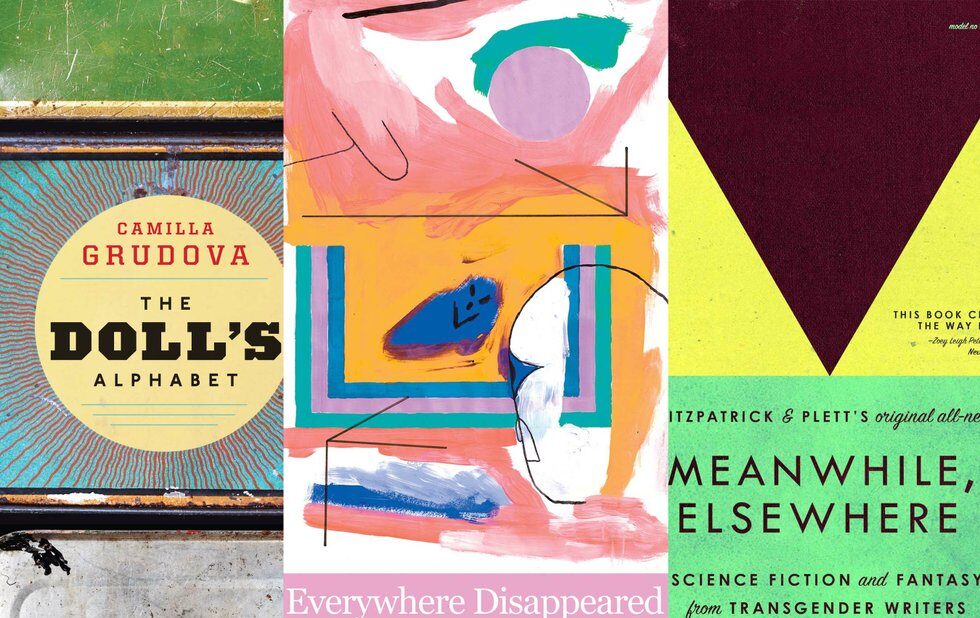 This fall give your anxiety-fizzed mind a break with an escape to another world. Even dystopian tales can help you feel better, because it’s really not as bad as all that – yet.

Here are five new sci-fi books from Toronto authors that will take you on magical, macabre adventures without having to leave your cosy reading nest.

America is on the verge of a new civil war and members of a cult led by a narcissistic tyrant must choose what to do when they run out of food. A young heroine, Ruth, breaks all the rules to blaze a dangerous path of resistance against an oppressive, racist and sexist culture.

Like Dunnion’s 2011 short story collection, The Dirt Chronicles, this book champions outlaw culture without romanticizing it. If you’re looking for a challenging but hopeful story to fill the bleak void after reading or binge-watching The Handmaid’s Tale, this book is for you.

First line: “They finish the salt pork first. Then the jarred pickerel, flats of canned beans, strips of cured venison.” On sale October 1.

In this collection of very short stories, women shed their outer bodies to reveal inner workings resembling sewing machines. A man brings home a corpse from his day job working in a graveyard. And a secret Gothic Society inundates a city with grotesque graffiti, stone griffins and pop-up cathedrals.

A new voice in CanLit, Grudova has much in common with some of the world’s most inventive authors. If you’re a fan of the discomfiting and absurd stories of Etgar Keret, and enjoyed the strange surprises in Rivka Galchen’s American Innovations, you’ll find much to disturb you in this debut.

First line: “One afternoon, after finishing a cup of coffee in her living room, Greta discovered how to unstitch herself.” On sale October 10.

Comic artist Patrick Kyle’s oddball and often cynical collection of shorts offers a day-in-the-life of a depressed Dracula, and a hilariously cautionary tale of what would happen if all phones disappeared. Henri Matisse’s famous painting The Dance, and Bart Simpson, make visual cameos along the way.

If you like the high-brow text-art of Jenny Holzer, the humour of Ryan North’s Dinosaur Comics or the surreal imagery of B-movie sci-fi, you’ll find lots to mull over here. Fans of Kyle’s New Comics series will recognize a few favourites.

First image and line: A squiggly drawing of hands and shadow puppets. “The artist – I’m ashamed of everything I’ve ever done, artistically or otherwise.” On sale now.

This weighty, 446-page collection of sci-fi and fantasy stories by trans writers redefines what saving the world looks like. The editors, Casey Plett and Cat Fitzpatrick, say it’s more about the strength it takes to survive the fraught everyday. It’s just that sometimes this includes a zombie apocalypse in Toronto (complete with a gem reference to “Aberzombie and Kitsch”), in Delicate Bodies by Bridget Liang.

In It Can Grow!!! by Lambda Award-winning Toronto author Trish Salah, a trans woman who writes to Dan Savage about how to deal with not being able to get off – and also how to cope with the brain-sucking amoeba that is threatening to end civilization. This is a book for all sci-fi and fantasy fans to enjoy, and trans readers will find themselves at the centre of every story.

First line, from Liang: “The first thing she noticed was the familiar scratchiness of cheap carpet. What was she doing on the floor instead of in bed?” On sale now.

Singer/songwriter Ron Sexsmith had a story idea a few years ago that he realized was much bigger than a song. He wrote every day while on tour in dressing and hotel rooms until he had a manuscript. The resulting debut novel is a fairy tale for grown-ups about magic, witchcraft and an unexpected transformation. But at its heart, Deer Life is also a story about a small boy with a big heart, friendship and heroism in the face of sinister forces. It includes plenty of Sexsmith’s delightful original drawings, and although it starts out with a verse, it’s written in jaunty prose that Neil Gaiman, Erin Morgenstern and Audrey Niffenegger fans will admire.

First line: “Leaves in the whirlwind, scarecrow’s clappin’ / All good children ought to be nappin’.” On sale now.