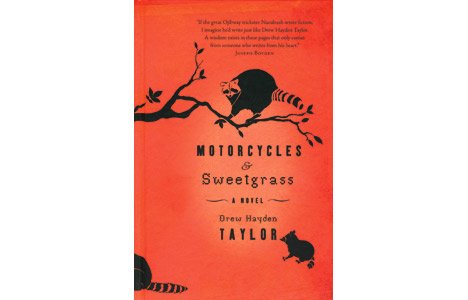 Drew Hayden Taylor’s got no qualms about poking fun at his native roots, and that’s what makes Motorcycles And Sweetgrass such a pleasure. It’s playful yet soulful, with a narrative that keeps those pages turning.

John, an outrageously attractive blond biker whose eyes change colour as often as he changes his last name, heads to Otter Lake ready to get into mischief.

He beds Maggie, the local chief, is a vaguely menacing presence to her son, Virgil, hangs out with the local drunk – a residential school survivor – and has all the rest of the women in this Anishnawbe town salivating.

Maggie tries to keep Virgil interested in school while juggling the complex politics surfacing thanks to a chunk of land just granted to the community by the feds.

John, mysterious and, to Taylor’s credit, not likeable, is starting to worry Virgil, who turns for help to his Uncle Wayne, a recluse trying to invent a native martial art. Wayne thinks John might be Nanabush, the shapeshifting mythological trickster so important in First Nations lore, but come on, who could believe that?.

Taylor, a playwright and occasional contributor to NOW, has a mordant sense of humour and an eagle eye for the details of life in native communities. He’s particularly adept at evoking their ambivalent relationship to pop culture

And he holds nothing sacred. He’s less interested in scoring points for diversity than in engaging in some serious iconoclasm. No earnestness here.

Motorcycles And Sweetgrass is a fun, rollicking book, and Taylor’s voice is fresh and unique.