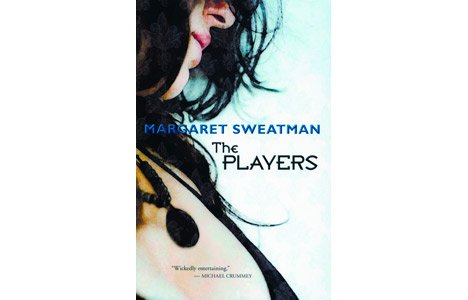 The Players has a little bit of every kind of action – backstage at the 17th-century English theatre, in the bedrooms of King Charles II’s court and in the frigid New World where Radisson and Groseilliers are seeking the Northwest Passage to China.

Into these settings author Margaret Sweatman casts Lilly Cole, a survivor if there ever was one. An orphan forced into prostitution, she encounters the Earl of Buxborough on the job. Also known as Bartholomew, one of England’s premier playwrights, he’s determined to turn Lilly into an actor and muse.

He’s so successful that the king tales a lustful interest, and soon Lilly is a favourite mistress who happens to witness the negotiations between the two explorers and the king for ships to set sail to Canada. Circumstances force her to stow away, and she takes off on a harrowing journey across the Atlantic.

The idea of a female at sea and in colonized Canada is fascinating. Douglas Glover mined similar terrain in his 2003 GG-winning Elle, but in this case, Sweatman’s heroine is a total fiction and powerfully evoked.

This is the fourth novel from Sweatman, who’s also a musician and playwright. It’s expertly researched and consistently intriguing, even if the writing is uneven. In some places, it’s got a poetic force that’s positively exhilarating. In others, it’s loaded with detail that bogs the story down.

The ending’s a bit of a cheat, too. It’s almost as if Sweatman tired of writing about the hardships of life at sea. But in Lilly Cole, she’s created a woman to root for.