NOW MagazineArt & BooksBooksThe Value Of Nothing: Why Everything Costs So Much More Than We Think

The Value Of Nothing: Why Everything Costs So Much More Than We Think 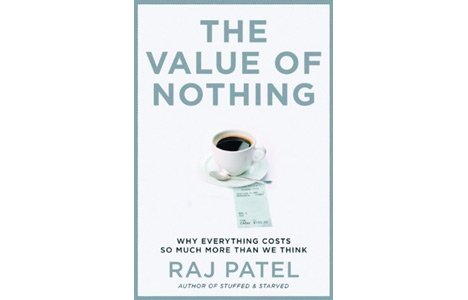 THE VALUE OF NOTHING: WHY EVERYTHING COSTS SO MUCH MORE THAN WE THINK by Raj Patel (HarperCollins), 250 pages, $26.99 cloth. Rating: NNNNN

The Value Of Nothing is three books in one: a polemic insisting that the current recession represents a deep crisis over the values and institutions of capitalism a quick, quirky survey of the establishment white European and American males who’ve analyzed the ways of capitalist markets and a tour of places (Brazil, Mexico, South Africa and even a passing reference to Toronto) where people are trying to go beyond markets to define what’s important in life.

Patel pulls off this three-dimensional tour of the defects of capitalism and classical economics while being LOL funny, poetic and prophetic, revealing his gifts as both writer and analyst.

My biggest disappointment with Patel’s book is its failure to take a whack at the Gross Domestic Product, or GDP, the most powerful messaging system for misinforming people about the difference between value and price. Commonly taken as the indicator of how the economy is doing, it regularly misleads because it rates in the same way all activities that cause cash registers to go “ka-ching.”

Purchased baby formula that displaces breastfeeding, a farm sold for box-store development, a forest chopped down and sold as lumber, the money paid lawyers to handle difficulties among neighbours – all are examples of actions that make money and cause the GNP to go up while subtracting from real economic and life values. The grip of the GDP on public policy-makers is that they think anything that makes dollars will cause meaningful growth.

By contrast, moms who breastfeed instead of buying formula, or neighbours who compost instead of providing slop to keep the garbageman busy add nothing to the GDP even though they arguably create value for the world.

The author of Stuffed And Starved, Patel is most comfortable citing stirring stories from the food sector. The auto, construction and real estate industries get off light.

But what a terrific present for high school graduates: a lively rundown of all the big names they’ll have to know at university and all the myths they’ll need to counter when they get out in the work world.