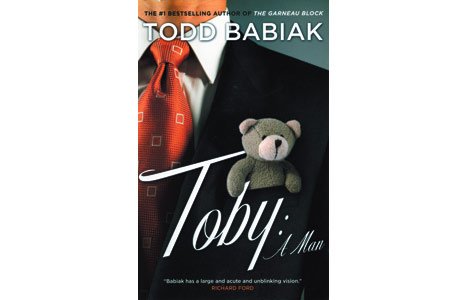 Redemption is a beautiful thing, but not when you can see it coming on page 50 of a 300-page novel.

That’s the basic trouble with Todd Babiak’s Toby: A Man. The satire lseems promising – all edgy, sometimes outrageous, while it tracks the downfall of Toby Ménard, an on-air TV personality whose specialty is men’s etiquette. And then it goes way soft.

After a harrowing day spent drinking at a men’s club, then rescuing his father from a flaming car, then heading to his girlfriend for warmth, Toby isn’t ready for his prime-time interview with the Conservative candidate in a federal by-election. He makes a ludicrous racist gaffe that leads to his being axed from the station.

In the narrow field of Quebec’s English-language television, that’s it for Toby’s career. Goodbye, condo and BMW. Hello, Mom and Dad’s basement. In the meantime, he has a one-night stand with a woman who suddenly dumps her toddler with him and disappears.

What could have been a caustic commentary on English-French relations in Montreal turns into a feel-good fairy tale. Toby’s silly, superficial TV gig could have been a vehicle for eviscerating a changing and fiercely competitive media landscape, but Babiak fails to follow through.

The female characters are all distressingly toxic, including Toby’s mother, Karen, which makes Toby’s life-altering decisions at the end seem positively demented.

Babiak handles the men with kid gloves – even Toby’s obnoxious TV mentor, Adam Demsky, is strangely endearing – so what starts out as a satire on status-obsessed men’s clubs turns into an exercise in male bonding.

The prose is breezy and lively enough. Too bad Toby: A Man’s themes are just as light.

Babiak launches his novel at the Dora Keogh on Tuesday (February 23). See Readings.