Vinyl enthusiasts who like to read and readers who enjoy music have something new to collect.Toronto-based literary press BookThug has. 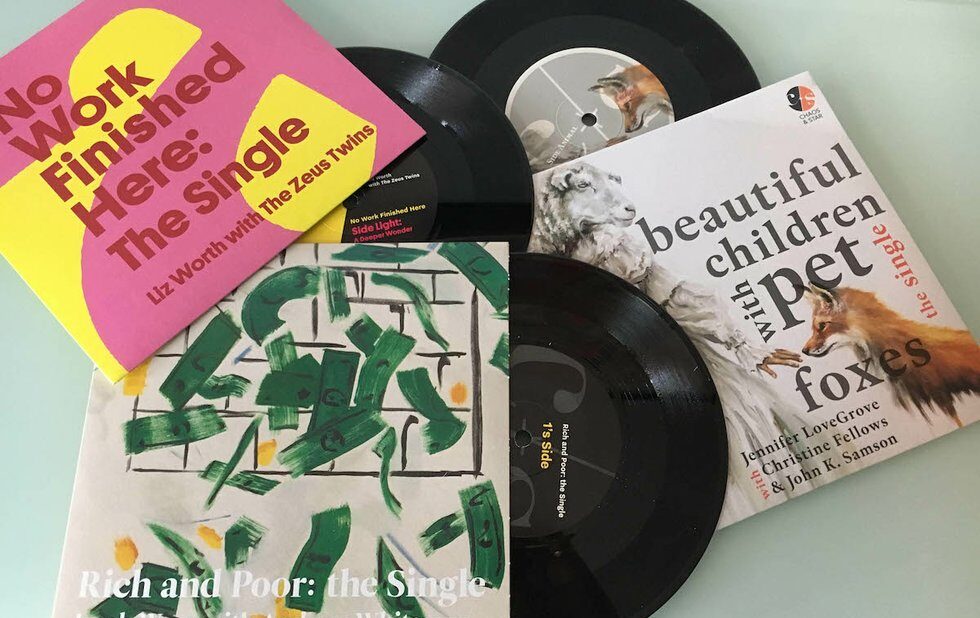 Vinyl enthusiasts who like to read and readers who enjoy music have something new to collect.

Though they feature readings by BookThug authors Jacob Wren, Liz Worth and Jennifer LoveGrove, theyre more than just readings set to music. All were intended as full collaborations, giving authors a say in the music composition and musicians a chance to help shape how the words are experienced.

The label is the brainchild of Andrew Whiteman, best known as a member of Broken Social Scene and frontman for Apostle of Hustle. He has made it his career mission to meld music and literature.

I used to work at Coach House Books in Toronto, and ever since then poetrys been my passion, Whiteman says over the phone from Montreal.

His recent music project, AroarA, draws on poetry by Alice Notley that he discovered online via PennSound, an archive of poets reading their own work.

After experimenting with soundscapes composed around poetry recordings, Whiteman found himself playing poetry samples onstage in 2009 during an Apostle of Hustle tour stop in Lawrence, Kansas, where he was invited to a party at the former home of beat poet William S. Burroughs.

I played my music there, and they understood right away, Whiteman says. Inspired, Whiteman developed a project called Sonic Poetry after returning to Canada.

Three years ago he talked to BookThug publisher Jay MillAr, and Chaos & Star and the collaborations evolved from there.

Whiteman decided to work with Montreal-based author Wren, and together they recorded a piece combining footwork (an electronic music dance battle genre) with parts from a Liszt piano composition as well as samples of Wren reading from his 2016 novel Rich And Poor.

I thought it was strange and put me off balance as a listener, Wren tells NOW.

We gave them carte blanche, says Millar. The only parameter was for the author to select two dichotomies in the text.

When you hold a book, you dont think of two sides, but when you hold a record you do, so we decided to explore this duality, MillAr adds.

Worth chose light and dark, and LoveGrove selected animal and human. The theme of duality also extends to the record label name, which in a nod to Whitemans original vision is from a Notley poem.

Music can have a powerful impact on emotion and intention. Creatively this felt very free and open, says OBrien. If youre in a band you associate with your little scene, so I appreciate whenever Im able to work across the arts. It gives you a different perspective.

The music heightens and enhances the atmosphere of the poems, adds LoveGrove. Its quite haunting and very cool.

Greg Davis, who owns the record store Soundscapes, sees the collaborations as part of a long tradition of cross-pollination between musician-poets like Bob Dylan and Patti Smith and beat poets like Allen Ginsberg.

The combination of musicians and poets didnt catch on, he says. However, there does seem to be something building, as evidenced by the upcoming Bill Murray record in which he reads literature accompanied by a classical cellist.

In Canada, the CBC has released recordings of poetry readings by Louis Dudek, Gwendolyn MacEwen and Margaret Atwood on vinyl.

But I havent heard this kind of collaboration between musicians and authors, says MillAr.

BookThug plans to release one or two Chaos & Star records a year. The first three records are available at indie book and record stores throughout the city and in digital format via the BookThug website.