The self-publishing platform is commercializing amateur stories about Drake and Kim Kardashian, and queer and feminist authors are learning to adjust 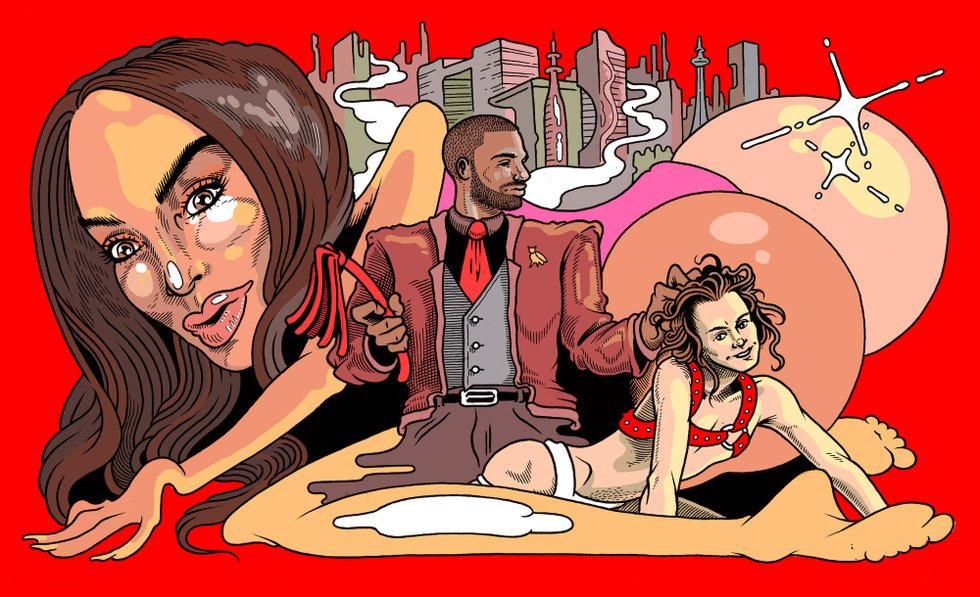 Destiny Richards is a wide-eyed and winsome fourth-year Howard University student who first encounters Drake in a bespoke suit at the bakery where she works.

So goes Shiloh Sanders’s 50 Shades Of Drake — or 50SOD to fans. The ongoing sub/dom-themed fan fiction series features a lot of sex, a few deaths and many references to Toronto, where most of it is set.

Enter Toronto-based tech start-up Wattpad, which partnered with Cosmopolitan to excerpt 50SOD in 2015. It has since amassed nearly five million reads over the past two years on the online self-publishing platform.

Wattpad’s user base clocks in at 55 million people per month. Its writers and readers have collectively logged 15 billion minutes a month in reading time.

Co-founded in 2006 by Ivan Yuen and Allen Lau as a mobile reading app, the company has become the YouTube of eBooks. Last year, Wattpad rebranded as a global multi-platform entertainment company and launched a studios division to adapt user-written stories into TV and movie properties. “We want to create the next Disney in Toronto,” Lau declared to the Financial Post.

Just as Disney’s empire was built on public domain works, Wattpad is similarly monetizing the phenomenon of fan fiction, a literary subculture based on pre-existing source material – think Marvel Comics, Riverdale, One Direction or Drake.

For the converted, fanfic is a labour of love. Dating as far back to the late 60s when Trekkies self-published fanzines filled with Kirk and Spock romances, the works are considered derivative under copyright, and not sold for profit. This creative freedom has fostered safe, inclusive online spaces and a gift economy where stories are freely exchanged.

But when fan fiction is commercialized, how does that impact the culture? The community is learning as it goes.

Wattpad’s own turning point for fanfic as salable entertainment property was Anna Todd’s After, about pop star Harry Styles. Originally envisioned as a “vanilla” 50 Shades, it has more than one billion reads. When Harry became Hardin, Simon & Schuster published the revamped series in 2014 and Paramount optioned the movie rights.

Says Ashleigh Gardner, head of partnerships for Wattpad Studios: “It really changed something that we thought of as an experiment to being a way we could help our writers.”

Next to romance and teen fiction, fanfic is one of Wattpad’s most popular categories. This year, 4.4 million English-language fanfics have been uploaded 60,000 are works of real-person fiction (RPF) – i.e. works featuring celebrities and other real people.

While this number is low, not many writers tag their stories RPF. In fact, most of Wattpad avoids commonly held fandom term: “slash” (fan works about the sexual relationship between two characters of the same gender) is referred to as “boyxboy” or “girlxgirl.”

This difficulty in finding stories makes it a challenge for more seasoned fan fiction enthusiasts to embrace the app.

Besides After, other successful Wattpad titles include kfxinfinity’s No More Selfies, a Kim Kardashian dystopian fiction included in Wattpad’s Imagines: Celebrity Encounters Starring You anthology and kaylorfanfiction’s Kaylor: The Timeline, a “girlxgirl” story about Taylor Swift and model Karlie Kloss.

“The author uses real photos, or moments of them being seen out in public together, and crafts a whole narrative behind that,” says Gardner.

While it’s been argued that RPF invades privacy and verges on being amoral for its sexually explicit fantasies, many fans also “re-humanize the personas artificially constructed for and by the media by giving them inner lives, often making them question their fame and struggle with their constant visibility,” academic Kristina Busse wrote in a 2005 essay.

For Busse, fans are creating a “collaborative fantasy space.” That’s how 50SOD is able to delve deep into Drake’s commitment-phobic persona, and add #blackgirlmagic to the #50shades trope.

Meanwhile, kfxinfinity’s No More Selfies responds to real world events by portraying a near future where the Trump administration has criminalized selfies, radicalizing Kim Kardashian as a freedom fighter for women’s rights.

“It’s just become my way of coping with reality, and taking the negativity and turning it into something more creative and hopeful,” says the author, who is better known IRL as Kevin Fanning, the VP of Talent and Culture at Cogo Labs, a Cambridge-based startup accelerator.

Of Wattpad’s 55 million users, it says 85 per cent are Millennials or younger. Most fanfic is amateur, making the exchanges between writer and readers pivotal to its development. So when it encourages fans to transform works for profit, how does it change the dynamic?

“Wattpad is trying to build its own culture where profiting from your fandom is fine [and] working with ‘official’ culture and subjects is fine,” says Anne Jamison, a University of Utah professor and author of Fic: Why Fanfiction Is Taking Over the World.

“The upside is it gives people and ideas that would not have access to the publishing world’s pipeline an economic opportunity,” she adds. “The downside is that it commercialize[s] the donated labour of young people who may not understand the terms of the agreement or their rights.”

Like any user-generated platform, Wattpad’s high volume of traffic is derived by its inline comments section, which turns a story like 50SOD into a social reading experience. When Aubrey enters a scene looking debonair in a bespoke suit, clicking on a small speech bubble reveals a Greek chorus: “Finally my boo appears,” “Hey papi.”

“Their feedback has made me consider different plot points or has made me want to steer away from a certain direction,” Sanders writes in a direct message on Wattpad.

The 50SOD community can leave between 50-1,000 comments per chapter. Active in Drake fandom, Sanders also runs @ovo_fans_ovo, an Instagram with almost 50K followers, and wrote 50SOD as a way to steer eyeballs towards her original fiction.

“An attempt at getting a book deal became a twisted, funny family here.”

Fanning is one of 150 writers in the program, and has travelled to conferences and landed paid writing gigs.

He earned just under $5,000 for writing 10,000 words of fan fiction for Comedy Central series Another Period, which vastly differs from online freelance rate he’s quoted for non-fanfic pieces written for Vulture and Racked. “You’re lucky if you get $250-$350 for a thousand words,” he says.

Wattpad has attracted more than $66 million in venture capital, and its revenue doubled in 2016. Its latest app, Tap, adopted a “freemium” model, charging $39.99 per year for full access to its chat-style short stories.

As Wattpad moves more aggressively into movies and TV, it raises questions around how writers remain involved.

In May, Wattpad partnered with digital video network Fullscreen on FANtasies, a 10-episode series that adapts popular fanfic about YouTubers. It’s a rare move: names aren’t changed and the YouTubers themselves star.

After watching a couple of episodes – and reading the stories that inspired them – it is clear the series is less about the writing and more about accessing social media stars. For all of fan fiction’s transgressive possibilities, it’s a shame the work getting adapted is bottom-of-the-barrel badfic.

“In terms of how involved the authors were in the adaptation, they weren’t really,” writes Scott Reich, Fullscreen’s Senior Vice President of Programming in an email. “Once a particular fan fiction author granted our show permission, showrunner Lon Harris and his writers’ room would figure out how to best adapt the story into a fully-realized, cinematic sketch a la Drunk History. In some cases it was a big adaptation and in others we did less heavy lifting.”

Meanwhile, in the Philippines, Wattpad is immensely popular, with its own book imprint and a show on network TV5.

One “KathNiel” fanfic – inspired by the country’s “Brangelina”, actors Kathryn Bernardo and Daniel Padilla – was so big that the couple actually bought the rights and transformed the story into a 2014 movie starring themselves.

But where this leaves fans has yet to be determined. Even though Fanning’s No More Selfies was included in a Wattpad anthology, he hasn’t been approached to develop it further. The story will likely have to change for that to happen.

“Down the road if it gets more popular, we might do a 50 Shades Of Grey.”