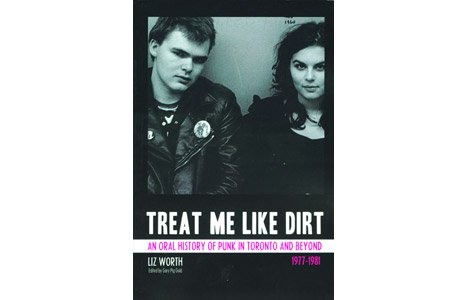 Liz Worth’s Treat Me Like Dirt: An Oral History Of Punk In Toronto And Beyond 1977-1981 ($39.99, Bongo Beat) is as chaotic as the movement it documents. Worth interviewed 200-plus players on the T.O. punk scene, including NOW’s Steven Davey of the Dishes, the Viletones’ Steve Leckie and Diodes manager Ralph Alfonso and organizes quotes – with no additional analysis – around… uh, I’m not sure. The subtitle includes a time frame, but the first third of the book covers 1969 to 1977. The chapter headings don’t help, and who’s on the cover anyway? I know it’s Don Pyle and Virlana, but not because Worth tells me. Details, details – this is punk, right? Chill. Worth talks with Fucked Up’s Damian Abraham about the book Monday (January 18) at the Gladstone as part of Pages’ This Is Not A Reading Series. Should be one helluva party.