NOW MagazineArt & BooksNot Yet: A Memoir of Living and Almost Dying

Not Yet: A Memoir of Living and Almost Dying 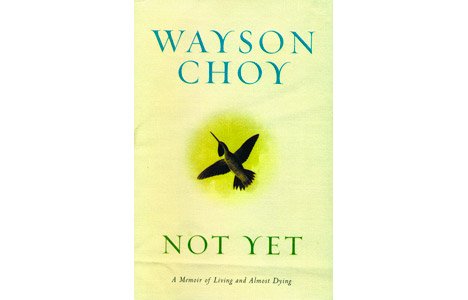 Trauma has a way of generating good books, even from non-writers. There are stacks of stories about prison life – think of the letters of Jack Abbott, the guy championed by Norman Mailer – or childhood sexual abuse, all powerful purely because of their content.

But when a gifted writer takes on personal pain, a different kind of magic happens. That’s why the definitive memoir of sexual abuse is Sylvia Fraser’s My Father’s House. And it’s why Wayson Choy’s Not Yet, about his encounter with near-death, is so powerful.

In 2001, Choy, plagued with a nagging cough, dragged himself to a hospital, having figured out that there had to be something wrong beyond mere allergies. When doctors diagnosed acute respiratory distress, they brought oxygen into his lungs via a medically induced coma. In that state, he suffered a heart attack. It took him months to recover.

Choy recounts that recovery in a story that celebrates his generous caregivers – both his family and in-hospital – and cautions against taking anything in life for granted.

There are sequences that are unusual and specific to Choy – his trip to China, where, paradoxically, he discovers his passion for Canada, and where he has a literally ghostly encounter.

But it’s the way he details what every post-coma patient experiences that sets Not Yet apart from any ailing person’s diary: how it feels to exercise his toes, his frustration at having to relearn to use a writing utensil, his tendency to analyze his condition based on how his loved ones are responding to him.

While waiting for sliding doors to open, he notices on the other side an aged, wasting man with paper-thin skin, only to realize that he’s looking at his own reflection. It’s a standard sickness scenario: look, in the mirror – is that really me?

But in Choy’s hands it’s a transcendent moment.