Walter Scott may be better known to most as his alter ego Wendy, the ingenue star of his acclaimed comic. 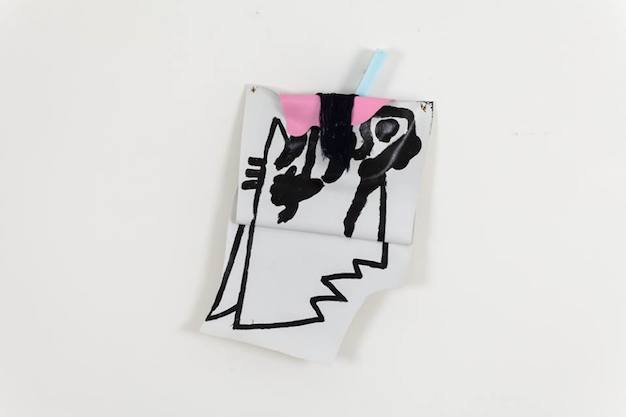 Walter Scott may be better known to most as his alter ego Wendy, the ingenue star of his acclaimed comic of the same name. It’s a story where art school anxieties, sloppy seconds, Tumblr insecurities, transparent friendships and other familiar adolescent woes found scribbled on bathroom walls are brought to life with mocking wit and foresight.

Since finishing the third book in the series, Walter has relocated from the student paradise of Montreal to Toronto where he continues to write, compare kale prices and develop Habitual Present, a continuing series of sculptural work.

The latest installment in the transient series can be seen when it checks into 8-11 gallery from today (Wednesday) to March 15. We spoke to Scott about his work and the sustaining drug that is Toronto.

Habitual Present is an ongoing series. Where did it begin? What does it represent for you?

I started making sculptural work in 2013. This series of works folds in a lot of thoughts I’ve had lately about physicality, like, living in a physical body and moving around and creating fictions on paper, but then also feeling formless, artless, sickening sensations at the same time, because of illness or colonialism or art history or herbal supplements. The sculptures are kind of like these forms moving through a passageway between these two things.

You’ve said that your sculpture work was an extension of Wendy, how does that manifest itself in physical form? What does it enable it to do that you cant convey on the page?

With Wendy, I create these alter-egos that I can embody and move through in different ways, kind of like shape-shifting. Sculpture does this for me too the materials, like human hair, torn denim, and hand-made rips and holes reflect this desire for embodiment and transformation.

What’s made Toronto unique for you since moving here?

I feel like it’s a steely-blue Ritalin for adults.

Where is the first place you’d take someone visiting the city?

8-11 Gallery and not just because I’m having my show there. Because they’re doing really cool stuff.

Is there anything you miss that Toronto doesn’t have?

Well it obviously doesn’t have the same nightlife or music scene as Montreal. But also, I’m kind of getting older and more tired and irrelevant so that’s kind of okay with me right now. Ask me again on Friday.

What’s your advice for acting natural in a gallery full of your own work at an opening?

Just be honest and be yourself. Or take a Benzo.

I’m showing some work in LA at Francois Ghebaly in June. Ideally, I’d like to find one place to stay for a long time. I’ve been moving around a lot trying to find out where that is. Maybe it’s here!