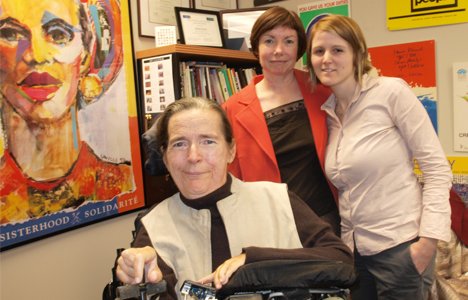 Catherine Frazee is headed to the Vancouver Olympics to tell the hidden stories of disability in Canada with her art exhibit, Out From Under: Disability, History and Things to Remember.

Ironically, because of her wheelchair, VIA Rail can’t accomodate her travel plans. So she’ll be driving to Chicago, taking an Amtrak train to Seattle, and then driving to Vancouver.

The obstacles Frazee faces ahead of the Olympics underscores the many challenges people with disabilities face on a daily basis in Canada.

The art projects’ co-creators, Kathryn Church and Melanie Panitch, will also be making the trip to the Vancouver 2010 Cultural Olympiad, though by plane. The opening on March 8 is set to coincide with the Paralympic Games.

Besides the arduous travel, all that separates the team of curators now from the Cultural Olympiad is a wall of work — building shipping crates, fundraising, promoting.

“We’re trying to construct a whole tour here,” Church said. “This is the first stop. But we have a piece of work we think should travel nationally. And what we’re trying to do is create that.”

“I think things are really picking up steam now, aren’t they?” mused Frazee.

The exhibit was featured at the ROM in spring 2008. It is a genre-bending exploration of Canada’s vast unknown past of disability successes and failures.

Or, as the Cultural Olympiad team puts it, this “luminous and elegant display of 13 diverse objects pays tribute to the resilience, creativity and cultural contributions of Canadians with disabilities.”

Traveling to Vancouver will take the exibitors out of a somewhat staid institutional context and present a compelling portrait for the world.

Not bad for a show that started out as a Ryerson University seminar in December 2006. But just like its content, Out From Under has gone from the realm of niche curiosity to profound commentary.

“We start from these somewhat ordinary objects that are kind of embedded in various contexts that have to do with disabilities,” Church said. “We worked outward from those objects, so in a sense the growth of our understanding of the history started in the particular. And then gradually we came to understand as we worked with those objects and stories that we had grasped a history that was more general.”

In this context at least, “general” means internationally resonant.

Take the “Digging” showpiece, for example. Here Terry Poirier, an autism consultant with the ErinoakKids Central West School Support Program in Burlington, has presented a heavily worn shovel as a symbol of deplorable memories we bear and inspiring steps we are taking, to improve the lot for folks with handicaps of all sorts in this country.

An image titled “The Oppressive Shovel” supplements the object, and shows headstones of unfortunate residents at Woodlands Institution, in New Westminster, B.C., neglected in a park as fallen leaves pile up around them. Many of those institutionalized had been “forced to take very cold showers and skin-burning hot baths, and sexually assaulted, resulting in injuries and pregnancies.”

The display will be all the more relevant for Olympic tourists and gallery aficionados since the work will be on display at the University of British Columbia’s Robson Square. After all, by the time the photo was taken, many of the bodies had been dug up and sent to UBC to be used as cadavers.

As desperate as such revelations seem, especially considering the institution was only closed in 1996, “Digging” still manages to blaze new pathways.

“The Ceremonial Shovel” is an image depicting the sod-turning for an accessible housing development in Yellowknife, N.W.T.

It was Toronto the Good that allowed such a unique museum piece to take root, argues Frazee.

“I think social justice activism is alive and well here,” she said. “Where else but in Toronto are we going to have that rich ground to seed something like Out From Under?”

“Here you have people with disabilities building the city,” said church. “Toronto has enabled a coalescence.”

Indeed, Out From Under is quite the “brazen insurgency of outliers taking centre, refusing periphery,” as the curators describe their exhibit.

The work has not gone unheeded. This week museum studies guru Richard Sandell’s book Re-Presenting Disability: Activism and Agency in the Museum will drop, including a chapter on the Out From Under exhibit.

Re-Presenting Disability: Activism and Agency in the Museum

Each step along the way the exhibit has bulked up, gaining traction in the process. Just in time to go global, they are adding an interactive element to their presentation, with the help of OISE student Margot Whitfield.

The student, currently completing a practicum in social media, is excited by the openness of Canadian youth to accessibility issues.

“I think younger people are more aware of these issues and look at it a different way,” she said. “When people go to use social media they will go to use the one that’s most accessible.”

And while it appears the world is ready to hear the stories told in Out From Under, as dreadful as some are, there are still some surprising challenges ahead.

But history is alive and breathing, being churned up, rewritten to our chagrin, and reinvented with every breath we take.

While those who attend the Olympic version of Out From Under will be confronted by just how far we have yet to go to reconcile the past and conquer accessibility issues, there is a message of hope as well.

“We ask, what is your response — what is your story in this context?” said Church. “We’re using it to learn.”[rssbreak]