An inventive, ingenious holiday adventure that doesn't pander to kids or adults 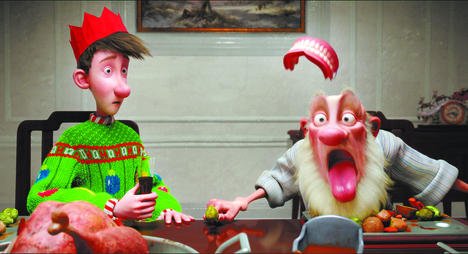 Arthur (voiced by James McAvoy) and his movie stand out from the ordinary holiday fare.

It’s been a while since we’ve had a good all-ages Christmas movie – since 2003’s Elf, I’d say. And the early trailers for Aardman Animation’s Arthur Christmas didn’t exactly get my hopes up.

But that’s why I don’t trust trailers. Viewed in full, this turns out to be a terrific Christmas picture – and a great movie, period. It’s an inventive, ingenious adventure that doesn’t pander to kids or adults. And it’s even pretty great in 3-D.

This giddy, computer-generated romp through the hierarchy of the North Pole establishes in its opening minutes that the position of Santa Claus passes from father to son over the centuries. The current Santa (voiced by Jim Broadbent) is considering retirement, and his technocratic eldest (Hugh Laurie) fully expects to inherit the role.

But then there’s awkward younger son Arthur (James McAvoy), whose dedication makes him the only person who cares when one child is inadvertently missed. Breaking protocol (and letting Santa sleep), Arthur and his ancient grandfather (Bill Nighy) decide to deliver the present themselves, accompanied by a wrapping elf called Bryony (Ashley Jensen).

What follows is a breakneck comedy in the Aardman style established in Wallace & Gromit: The Curse Of The Were-Rabbit and Flushed Away. The animators lure us in with clever jokes and ingenious visuals – including a most unexpected urban detour – and then sucker-punch us by revealing the characters’ surprising emotional depths.

And if I can just put this out there, Bryony deserves her own sequel. Can someone get on that?