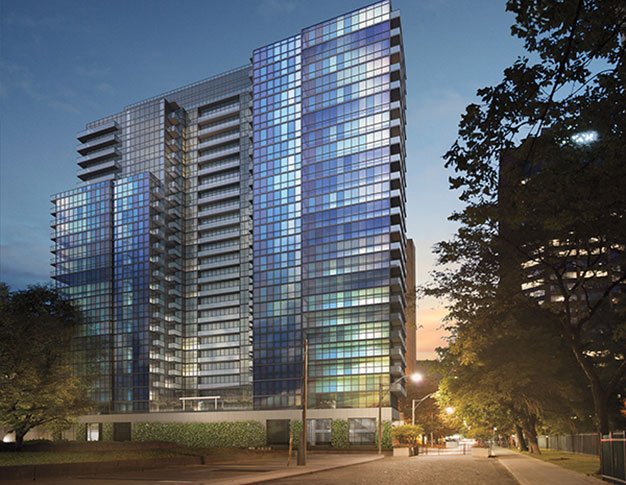 A rendering of the 210 Simcoe St. development

Tomorrow (January 30) is the last day artists can apply to secure one of 19 residential units in two downtown condominium developments.

The artists-in-residence plan is being spearheaded by Artscape (the non-profit group that “makes space for creativity and transforms communities,” in its own words), the City of Toronto and developers, the Sorbara Group & Diamondcorp and Great Gulf.

Under the plan, three units at a development at 210 Simcoe St. and 14 units at PACE (being constructed at 155 – 163 Dundas Street E., at Jarvis) will be sold to qualifying artists, which includes painters, musicians, filmmakers, sculptors, writers and poets. An additional two units at 210 Simcoe will be available for rent. Artists must live in the units and are forbidden from using them solely as workspace.

New Artscape president Celia Smith says that the project is not a marketing ploy to sprinkle a few bohemians into a condo mix to make the developments more alluring to the public.

The sole goal of the new initiative is to provide affordable, downtown housing for artists, says Smith. She points to similar Artscape ventures that offer low-cost rental and/or residential spaces for artists at Gibraltar Point, the Distillery District, Wychwood Barns and other locales across the city.

To entice artists into becoming property owners, Artscape offers a mortgage plan that dramatically lowers costs at the downtown developments. Artist suites at 210 Simcoe range from $172,400 for a one bedroom and den unit to $191,600 for a two-bedroom unit, while artist suites at PACE range from $98,750 for a bachelor to $225,000 for a two-bedroom unit. The rental units can be had for $837/month. The 210 Simcoe development is scheduled to open for occupancy in July 2015 while PACE will open in early 2016.

The lucky few will be selected based on the Artscape Value Exchange Program, which means artists exchange community involvement for value. “The Commitee is looking for applicants that show a strong desire to participate with the program and who have a history of involvement with the community,” says the website. That means volunteering with Artscape or teaching fellow residents some of your skills.

Despite rock-bottom prices, the downtown projects remain a point of controversy for some local artists.

“I think that while it would be interesting to have art projects in condos, there is an inherent resistance to the idea because of the effect that condo developments have on the landscape and local community,” says Xenia Benivolski, an artist and curator who co-directs 8eleven Gallery on Spadina Ave. “There is a perceived danger that allowing condo developers to support artists in the downtown core would create the illusion that artists are in turn supporting condo developers.”

Benivolski concedes that affordable rents are hard to come by for artists in Toronto (thanks in part to aggressive condominium development).

But she worries, however, that the downtown initiative “is a way for condo developers to meet mandated low-income unit quotas without having to deal with the extremely under-privileged, racialized groups that make up the lower class demographic in Toronto, as the artist community is pretty homogenously white and privileged.”

“At this point I could not afford it, but otherwise I would be interested. I support Artscape,” says Legrady.

In addition to getting their finances in order, anyone who wants a unit has to provide an artist CV. Find out more here.