In light of the recent backlash against Black Lives Matter Toronto and the ongoing anti-Black racism across North America,. 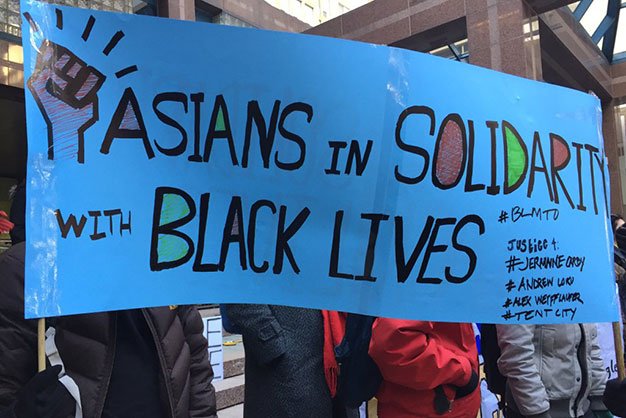 A group of protestors at Black Lives Matter Toronto's tent city in front of police headquarters in March.

In light of the recent backlash against Black Lives Matter Toronto and the ongoing anti-Black racism across North America, a group of Asian-Canadians are showing their support for BLM by confronting anti-Black racism within their own communities. Theyre doing this by writing a letter directed at parents, grandparents and community elders that addresses anti-Black and systemic racism, the legacy of colonialism in Canada and what it means to be an ally. The letter has been translated into over a dozen languages.

Race and its impact on our lives, even here in Canada, was a topic that I never grew up talking about within my community however as part of the younger generation, it’s becoming such an integral part of my life, says Nam Hoang, who helped translate the letter into Vietnamese. I wondered how this conversation would go with my parents.

Hoang is one of more than 100 Asian-Canadians involved in this project that started in early July. The Canadian version was inspired by a similar letter in the U.S., which launched after the police killings of Alton Sterling and Philando Castile. That letter started as a series of tweets by Christina Xu, an online community organizer based in New York who had seen groups of Asian Americans rally in support of Peter Liang, an Asian-American NYPD officer who was convicted of killing a Black man earlier this year.

In fact, lets draft letters in our native languages to our parents and our communities. Get it passed around WhatsApp, WeChat, LINE, etc.

Xu started a letter in Google Docs and encouraged others online to help. Hundreds of Asian-Americans contributed to the final draft of the letter in English and translations into dozens of languages.

The group involved in the Canadian versions says it was important to create a separate letter to tackle the unique issues here. In a press release issued by Letters for Black Lives Canada, organizers mention that Black people in Canada are disproportionately affected by police brutality, carding, incarceration and immigration detention.

The myth of multiculturalism has perpetuated the notion that Canada is a fundamentally fair place, a myth that many Asian people have bought into even though many of our family and community members have and continue to face race-based discrimination, the press release states.

Edward Hon-Sing Wong, a Toronto-based social worker, says he was mobilized to speak up after Andrew Loku, whom Wong considers a colleague, was shot dead by Toronto police in 2015. The officer responsible was found not guilty of criminal charges in March, and Black Lives Matter Toronto has continued to demand that the officers name be released to the public.

While I am angry about the role of the police, it has also led me to think of my complicity by failing to intervene in the many incidences of police violence that I have witnessed in my line of work, Wong says. While many in Asian communities also experience police violence, it has not necessarily been in the same scale or context. I do think that if as members of the Asian communities we fail to speak up and offer solidarity, we become complicit in the violence.

Another organizer, Michelle Cho, echoes a similar sentiment. As a social worker and educator, Cho has helped organize a number of anti-racist workshops but says that most of the conversations around anti-Black racism have continued to be framed in a black-versus-white context.

It made me wonder where other racialized folks were in that dialogue, she says. Many folks in our communities have been having these conversations for a long time. The BLM movement refocused our conversations and really made me rethink what our role is holding our own communities accountable.

Part of that conversation includes acknowledging the ways in which many Asians have benefited from white privilege. In North America, Asians are often stereotyped as a model minority, particularly in comparison to Black people. Not only is model minority discriminatory, but it erases the racism experienced by Asians.

We struggle with racism in different ways, for example the framing of West and South Asians as terrorists, Wong explains. Thus, we decided to make multiple versions [of the letter] that reflect not only linguistic differences, but cultural nuances. Ultimately, we want people to adapt the letter to their own familial contexts.

For some organizers, their reason for helping write the letter was deeply personal. Toronto artist and educator SUN says she was disowned by her father, who lives in Korea, six years ago for dating a Black man. The experience showed me how deeply entrenched the prejudice is for some people in our communities that are part of the Asian diaspora, not just in Canada but around the world, she says.

SUN says that living in North Yorks Jane and Finch neighborhood, which has a large Black population, for over a decade, has also opened her eyes to the injustices Black people face here in Toronto. She cites policing, education and navigating institutional spaces as some examples. SUN has been organizing in solidarity with the Black community for several years, and was involved with BLMTOs tent city occupation outside Toronto police headquarters earlier this year.

The Canadian letters were created using Google Docs and Slack, a free online instant-messaging platform, so that anyone anywhere could contribute. The finalized versions of the letter, including its translations, are available for free on the Letters for Black Lives Canada website. The group says theyll continue to upload more translations of the letter as theyre written. They also plan on facilitating discussion groups and workshops to keep the conversation going.

This is a difficult conversation to have, and everyone starts from a different place, SUN says. The aim is to build bridges, not create more divides, and sometimes that work requires a lot of patience, and a willingness to hear out the other person’s opinion, even if you don’t agree with it, for the purposes of trying to come to a place of common ground and human connection.