Ask a DJ: Toronto’s Justin Astro is taking over the downtown techno scene

Plus, listen to an exclusive, bouncy mix by the local up-and-comer 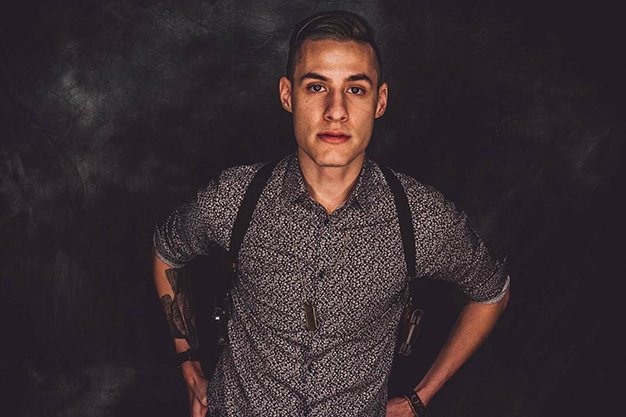 Toronto’s own Justin Astro has been making waves in the city’s electronic music scene since last summer, and this year he’s really stepped up his game. Gracing clubs like CODA, The Hoxton, Nest, and Sound Academy (to name a few), he’s a fan favorite amongst local techno enthusiasts and he’s busy, opening for big names all over Toronto.

His vibe and signature bounce spread across the dancefloor like wildfire, with dangerously groovy tracks and passionate energy. The techno he plays is dark, deep, and bound to keep you going all night.

We were lucky enough to snag an exclusive mix from Justin Astro for NOW listeners and get to know him a bit better. It’s bouncy, it’s deep, and it’s absolutely on point.

Once you’re hooked, you can catch him playing at CODA on April 29 alongside Deko-Ze, Jerome Robins, and Evan G, or playing back-to-back sets on May 7 with Mikey Palermo at Nest’s It’s a Taurus Thing.

You’ve been a music fan for a long time. What made you decide to start DJing?

I’ve always really been surrounded by music, whether it was my mom teaching piano after school or my uncles always bringing over racks of CDs and tapes – it’s always been a part of my life in some capacity. When the internet came about, places like MySpace started to become a thing. I found myself constantly trying to discover new sounds and genres that got me excited – the feeling of “digging” for music is probably my favourite part of my process. I feel like becoming a DJ wasn’t something I had ever really envisioned for myself either – it was more or less something that just sort of fell into place. I’d always been around the Toronto nightlife scene since my teens as a photographer, and I guess over time, as I spent more time in the clubs and got older and more mature, it started to become something that I wanted to do just because it looked like a lot of fun. I think that’s where you get the most passion out of someone.

What Toronto producer would you love to work with or play back to back with?

It’s always tough to pin down certain individuals that I’d love to work with because realistically, I’d like to be able to work with everyone at some point or another. I think that’s the best way to help expand your abilities and your approach to music. Guys like Mark Oliver, Flipside, Hatiras, Manzone & Strong, Deko-ze, etc. are those guys who’ve been doing this for a while and have a rich history in the Toronto scene. Those are the guys you can learn a thing or two from.

What sort of energy do you try and bring to the dance floor when you play?

The same kind of energy I would expect if I was on the dance floor as well. I like to say that I spend as much time on the dancefloor and interacting with the people that came to have a good time as I do playing music for them. This gives me a good pulse on the type of music that people want to hear. On the other hand, I also like to just play what I feel is right and hope my energy and passion resonates with people. So far, I think it’s working.

What can we expect from you this summer?

Oh God, plenty! I’m very much a seasonal kind of person and now that we’ve conquered another winter I can get back to being a regular human again. I’ve got a lot of great upcoming events and helping organize a few others alongside my good friends at BASE Toronto. Other than that I’m definitely going to be upping my studio time and producing more. Outside of music I’m hoping to experiment with some fashion ideas and art in my downtime – I like to keep busy.

Tell me three songs everyone reading this should dance to right now?

This question is probably the trickiest of all questions to ask a DJ! I have so many favourite songs right now, it’s a bit of an issue.  Some that come to mind though would be Billy Kenny’s Work Me for its super high energy and amazing vocal sample the Ardalan remix of Kakade & Cid’s new Us release, which literally made my eye twitch the first time I heard the record and for number three. let’s go with something more laid back with Shadow Show by Cassara. This record has some really incredible sample work and a bass line that just oozes groove. That record is also only available on vinyl but you can stream it digitally on Soundcloud.

Some labels people should check out as well are This Ain’t Bristol, Dirtybird Records, Hot Creations, Simma Black, Bodhi Collective, Main Course and Box of Cats – that should keep you busy!