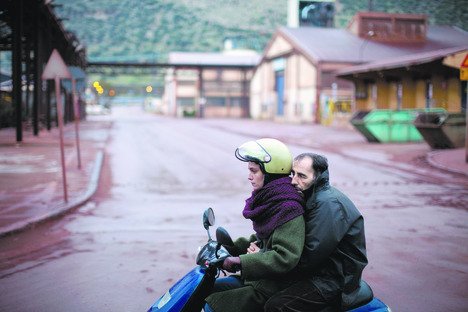 Ariane Labed and Vangelis Mourikis take us on a fascinating ride.

Athina Rachel Tsangari’s Attenberg is an austere study of an unsocialized young woman named Marina (Ariane Labed) facing the death of her father (Vangelis Mourikis) in the crumbling Greek industrial town where they’ve lived for her entire life.

Viewed from another angle, it’s a bone-dry coming-of-age comedy in which Marina tries to get over her aversion to physical pleasure by seducing a visiting engineer (Giorgos Lanthimos) with the help of a passive-aggressive friend (Evangelia Randou).

Maybe it’s both at once. Why do we have to put labels on things? Well, because humans do that sort of thing.

Marina does, certainly, thanks to an antisocial tendency to catalogue and evaluate her responses rather than dive in and actively experience them. That’s why she’s not big on tongue kissing – “It feels like an eel in there. I want to throw up.” – and why her father’s deterioration is something she can only discuss with him in the abstract.

Tsangari sets Marina’s interactions against the utterly deserted backdrop of a dying factory town aside from the three other characters, the rest of the world may not even exist. It’s a great visual conceit, but it also captures the cocoon of misery that envelops people in times of profound loss. We can’t help but empathize with Marina even though she gives us almost nothing to hold on to. She’s human. She needs us. She needs someone.