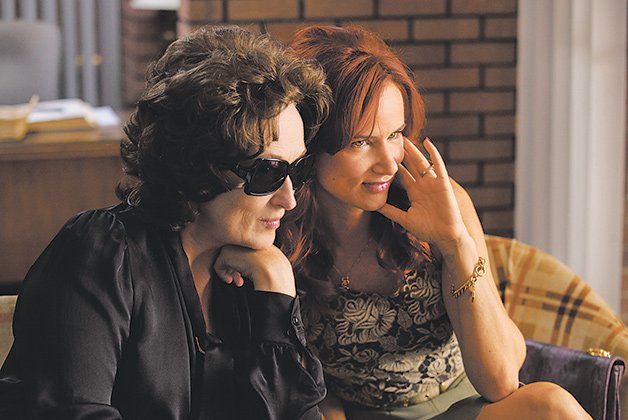 This perfectly constructed slice of Oklahoma Gothic about a family that convenes when the alcoholic patriarch disappears comes perilously close to parody. You can buy the many variations on family rot and the heightened reality onstage (Tracy Letts wrote the screenplay based on his Pulitzer Prize-winning play), but all the revelations become almost too much when they’re in your face on the screen.

Director John Wells’s attempts to open up the piece by plunking characters outside a strip mall or in a backyard do nothing to disguise its staginess. Swelling orchestral elements in Gustavo Santaolalla’s score are clunky – there’s enough going on without music hammering it home. And there’s really no one to root for.

But Wells’s cast is so good that they make the thing believable. Meryl Streep is a knockout as drug-addled matriarch Violet and, though you couldn’t say she matches her, Julia Roberts definitely holds her own as Barbara, the daughter with the troubled marriage living with the guilt of having moved as far away from the family home as she can get.

Streep’s performance will doubtless divide audiences. Haters will see it as one of those turns in which the technique is so obvious you’re too busy admiring it to grasp the character she’s playing.

Fans like me will see another tour de force in which Streep flaunts her gobsmacking chops. There’s always an element of a Streep performance that becomes its signature. Her trick this time out is to significantly lower the pitch of her voice, a feat as difficult as her regular specialty – maintaining an accent.

At the end of the spectacular dinner sequence, the movie’s centrepiece, Roberts makes the inspired choice of lowering her own voice to suggest that, unless she makes some smart choices, Barbara could easily turn into her mom.

For all its deep flaws, August: Osage County is extremely entertaining. Sit back and enjoy the ride.